It was the last plant everywhere to lose its leaves, you’ll see it leaf out first in earliest spring. It crowds out our native bushes and young trees, swallowing up habitat for birds and pollinators. 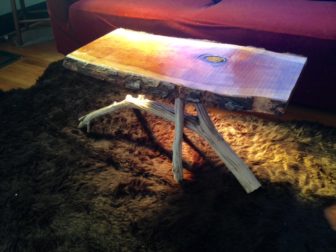 Bush Honeysuckle might be your privacy hedge, but it’s the worst privacy option, in yards or parks or alongs streams and roadways. What to do with such a plant invader?

Woodworker Dale Dufer is making tables with it – and getting others to think creatively about this serious landscape problem in his “Think About Tables” workshops. “Nature grows this material in interesting shapes,” he says. “It’s sturdy and strong, an ideal wood for making fun furniture – and anybody can learn to make a bush honeysuckle table!” 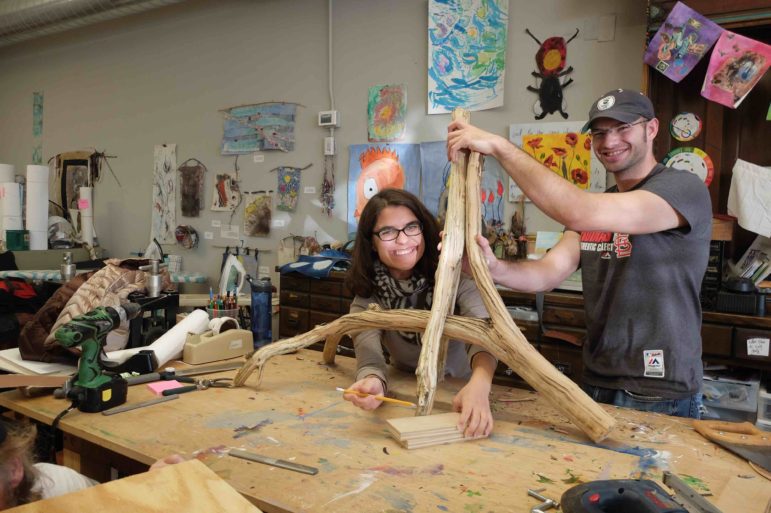 Dufer’s work has grown roots in Maplewood. He organized two exhibits of these quirky, original pieces at Stone Spiral Gallery. He showed his own work in 2015, and put together a group show, “Invasive Innovations” in 2016, featuring tables made by 15 people in Think About Tables workshops. Maplewood residents Renee Paradowski and Randy Difani showed a coffee table they created together at Maplewood’s Living Arts Center, that became a focal point in their living room.

Dufer also helped organize conservation groups to join together in a “Honeysuckle Sweep for Healthy Habitat,” that now takes place spring and fall. He reports, “Coordinated efforts by groups like the Open Space Council, St. Louis Audubon, Forest Park Forever and Missouri Master Naturalists are raising more awareness about this invasive plant. Sweep event attract volunteers of all ages to help remove it from public places.”

Deer Creek Park is one location where these “honeysuckle hacks” have opened up the stream bank, which had been completely overgrown by this one bush. Native plantings restored to the areas where bush honeysuckle has been removed show what a healthy creek habitat looks like.

“This is the ideal time to harvest bush honeysuckle,” Dufer says, “ to make your own table.” He provides what he calls furniture grade (old growth) honeysuckle sticks for the workshops he teaches, so workshop participants can leave a half-day session with their own unique table – built with a few basic tools plus ecological awareness.

Think About Tables workshops will take place February 4 and 18 at Shaw Nature Reserve, and March 25 at the Butterfly House. More to come — stay tuned at woodworms.net. 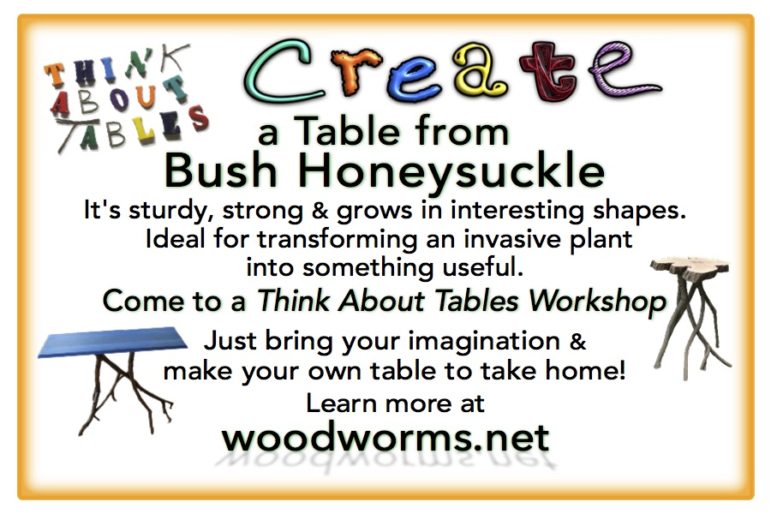 2 thoughts on “Building solutions to table a problem: bush honeysuckle”