Those of you who were in the audience for one of the performances of the Maplewood-themed, Shakespearean mashup, “Remember Me”, experienced a rare and delightful event.  If you haven’t heard anything about this play, let me say, my wife and I were stunned by the very high quality of the production.  It was wonderful…everything from the 10 foot high puppets to the live music.  Put together by the very talented theater department of St. Louis U, it was a three-of-a-kind event that took place over three nights of one weekend in September 2016 and is unlikely to be repeated ever.

The playwright, Nancy Bell, and I met several times while she was assembling her material.  A couple of times she asked me what did I know about the Clamorgan family and their connection to Maplewood.  Easy question for me to answer.  Nothing.

The large puppets represented Maplewood “ghosts”. One was Charles Rannells who you’ve read about here.  Another of the ghosts told the story of Cora Clamorgan (Called Clara in the play). A sad tale indeed. Sadder still because it was based on a true story.  I was totally unfamiliar with this story and asked Ms. Bell for her sources which she kindly supplied.  The story is so complicated and nuanced that I’m wondering if I can do it justice here.

Cora Clamorgan was born in 1892 in Carondelet.  In 1907, she and her family moved to the western edge of St. Louis very close to the border of Maplewood. Their new home was at 7122 Marie St. in Ellendale.  By this time she had become a very beautiful young woman.  It was here that she fell in love with one of her brother’s friends, John Collins.  She was 18 and him just a year older when they eloped and were married in August of 1910 in Hermann.  They lived after their marriage with her parents, Louis and Louisa.  The next May they had a charming baby that they named Virginia Blanche.

Cora’s sister Blanche, unmarried, was a prominent member of the Maplewood Church of Christ, Scientist. The building still exists at 7121 Manchester.  She worked as a stenographer in downtown St. Louis and had shortened her last name to Morgan. She also had sisters, Grace, 11, who attended Longfellow school, Clothilde,17, attending Central High School and Maud. A brother, Walter, had graduated from Central High.  He was employed by an automobile company on Olive St.

Things were going very well.  The trouble began when her sister, Maud, who had married a man with the last name Davis gave birth to a child whose “distinctive” physical appearance cast some doubt about the racial purity of the mother.  The Davis’ lived in a home at 7119 Manchester which was owned by a wealthy Maplewood man, Owen Collins.  Owen was Cora’s father-in-law.

In Missouri in 1911 as in many of the other states marriage between a white person and a person with ⅛ Negro blood was illegal.  Owen Collins received an anonymous letter informing him that “two Negro families had invaded” Maplewood.  His own son had married into one of them.  Another was living in a home owned by him.  Word of this soon reached the newspapers and it quickly became a national story. A national story, for Christ’s sake.

The Clamorgans by Julie Winch is a fascinating account of the history of the Clamorgan family in St. Louis.  This particular episode is covered in the book but is just a small part of the story Ms. Winch has presented so well.  The book was recommended to me by Nancy Bell.  I highly recommend it to you.

The first mention of this story that I’ve found was in a couple of St. Louis newspapers on June 9, 1911.  So here we go. 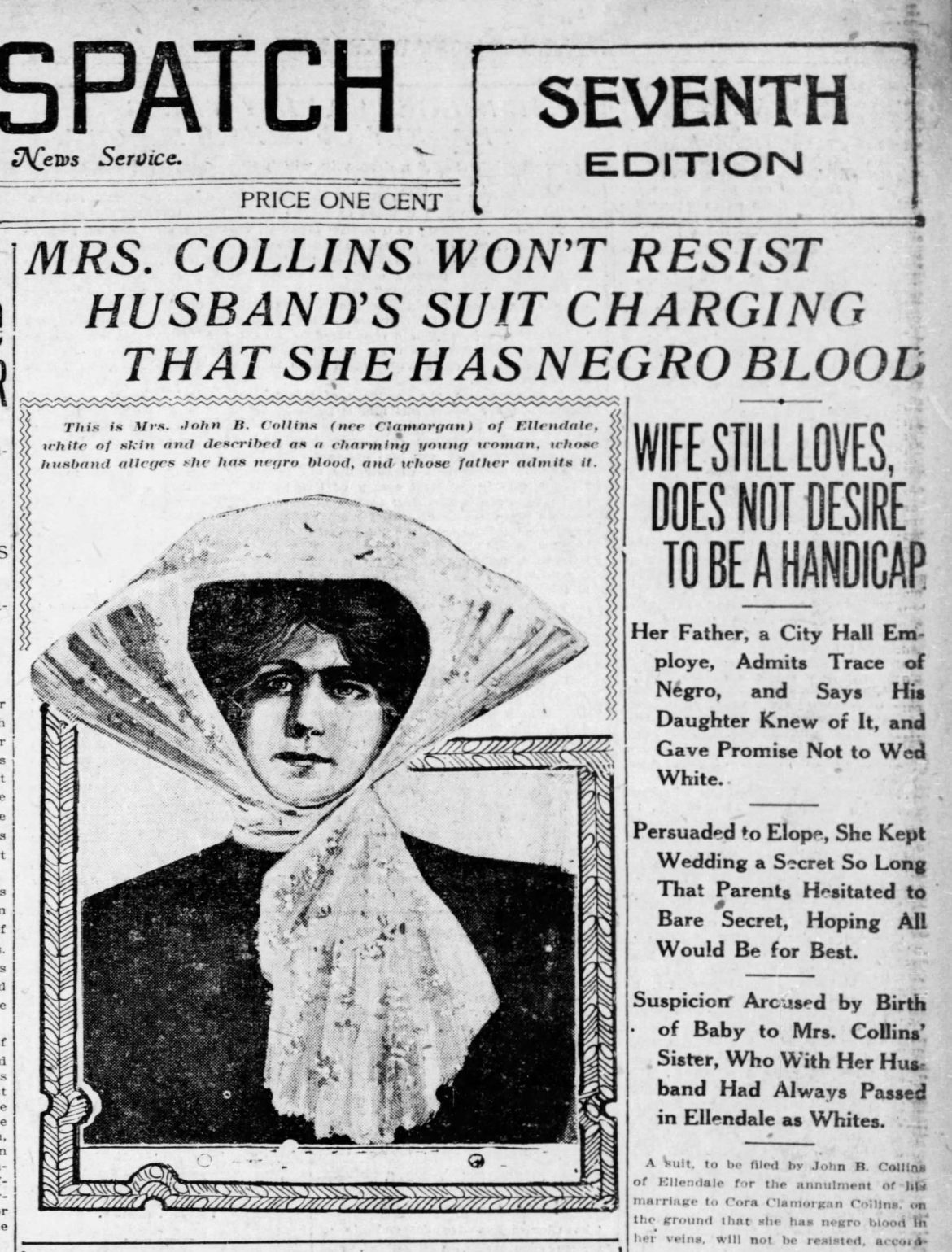 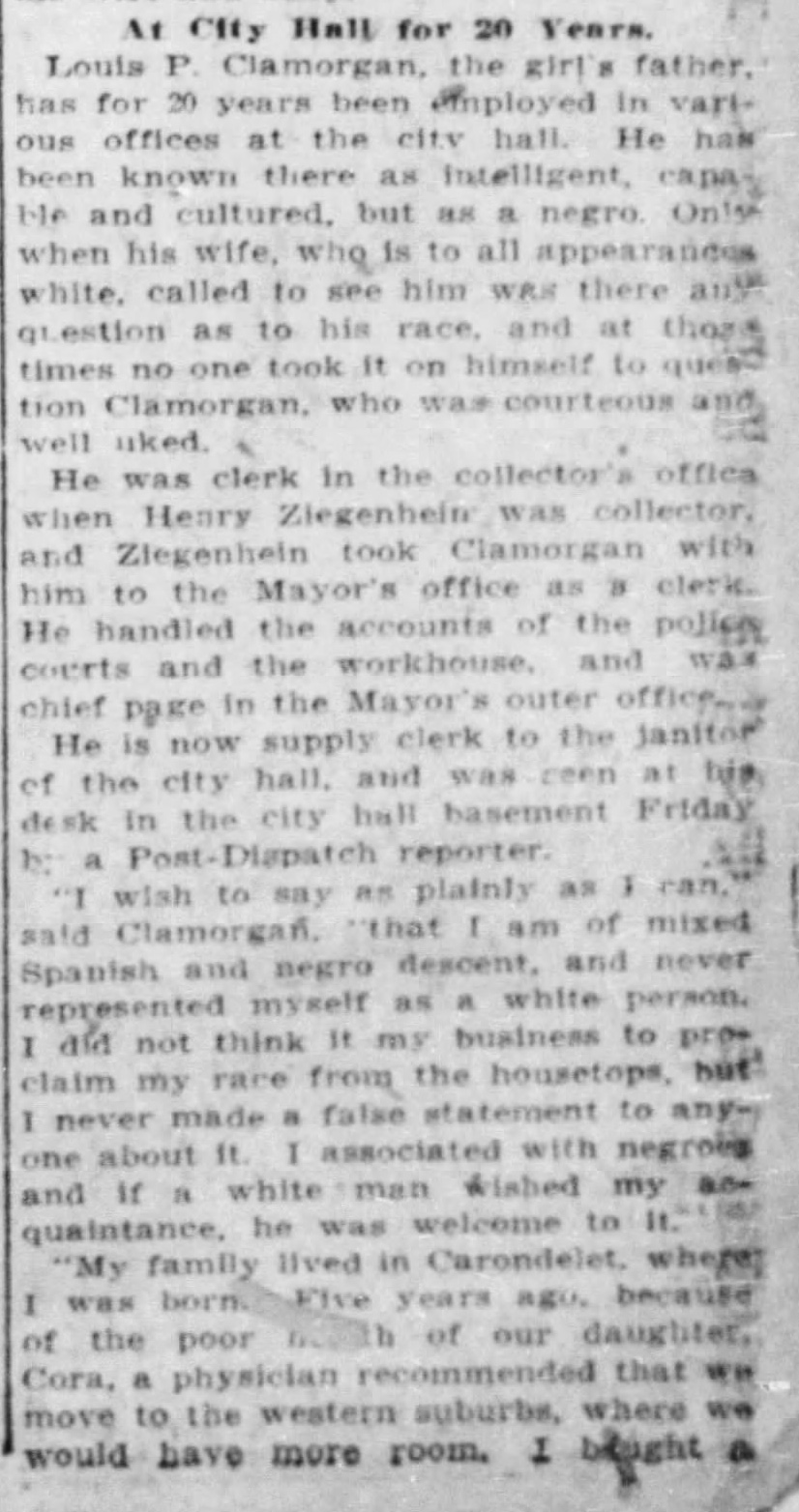 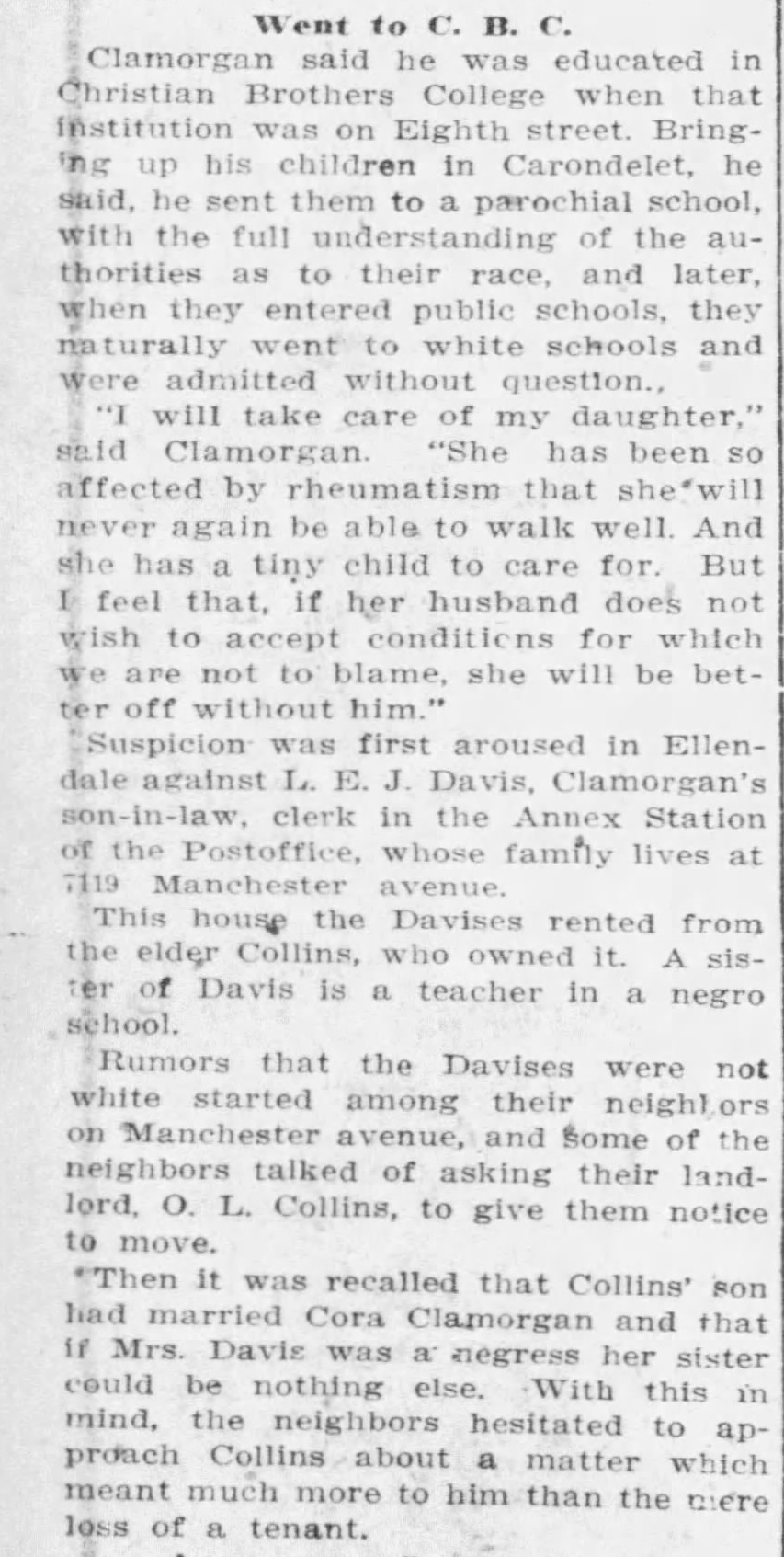 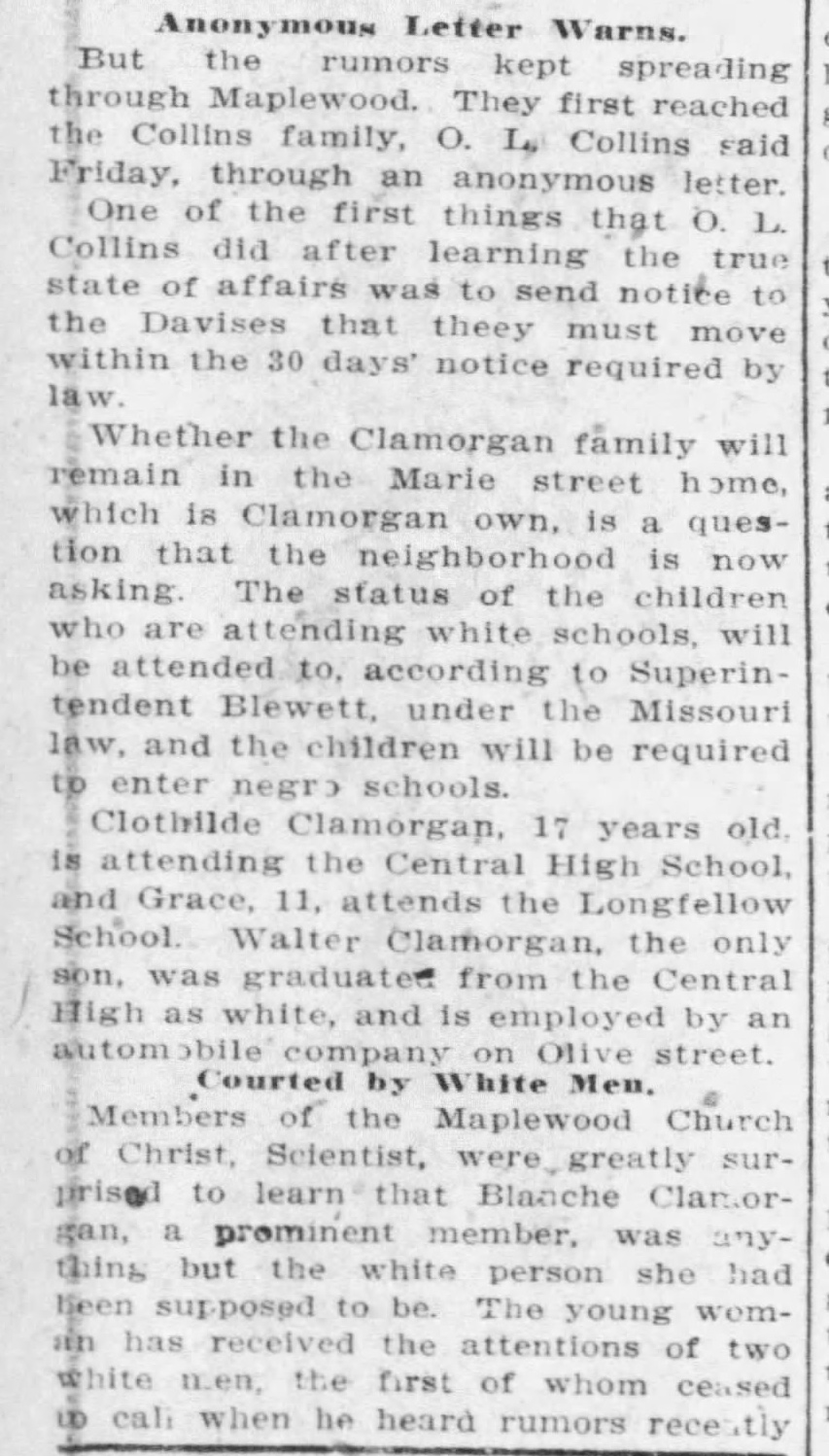 There you have it.  The opening salvo.  There is much more to come.  This is about half of what the Post-Dispatch published on June 9, 1911.  Much of the story causes most of us to wince today.  While we have made progress, there is still much more to be done.

I’ll give everyone a little time to digest this before I publish more.  There are many related stories that I feel are important to publish again.  Perhaps in this very uncertain time in which we are living, we can feel good that we’ve made some gains in understanding more about how we all belong on this planet.  None more than others.