The Cyclone is gone. Why bring it up now?

Here’s why. Nothing that I have seen, read or heard since the Cyclone was demolished has changed my mind from thinking that we shouldn’t have let it go. It was part of the historic industrial complex. It was structurally sound needing only a paint job. It could easily have had a useful second life as a commanding 3D presence advertising the historicity of the mill complex and the new businesses located within. With a bit of money spent on it, it might have become a community centerpiece.

In 2006-7 the Internet sites such as Facebook had not evolved to the point where they could be useful in this effort. The only options available were an appeal to the Historic Preservation Commission and to the Maplewood City Council which were both done. As for rallying the troops, we had to rely on The Mid-County Journal (the free newspaper) or the Post-Dispatch. The Journal published a front page article about the art contest with a photo of Steve Turner and his award winning painting. The Post-Dispatch published nothing.

By 2007 a great fellow by the name of Bill Sorby and I had a new idea. That idea was to use the Cyclone as a backdrop for projected images of the art that had been entered in our Let Them Eat Art contest as well as images of classic instantly recognizable art. To promote that idea I created the poster whose image is included in this post.

This would have been fun. Bill was an owner at the time of the Maya Café which was directly across Sutton from the Cyclone. Ideally we would have liked to mount a large projector on the roof of the Maya. Then as the sun set on the day of Let Them Eat Art, we would have started the show. This would have made a very dramatic scene at the location which was already a prime spot during LTEA.

The thinking behind the idea of the projected images was that any wild decorative paint job applied to the Cyclone was liable to be controversial. Projected images ephemeral by nature would be much less so. Hopefully this might have become a regular weekend event in warm weather.

On June 19, 2007 about a month before the second LTEA, the Cyclone was demolished. Of course, this eliminated any chance of following through with our idea. Who knows? It might have become a very popular feature in our community.

If you haven’t gotten it by now, the lesson is: If we don’t preserve what’s unique about our community, how are we going to tell it from any other? Need a glimpse of the future? Take a look at Big Bend and Manchester. 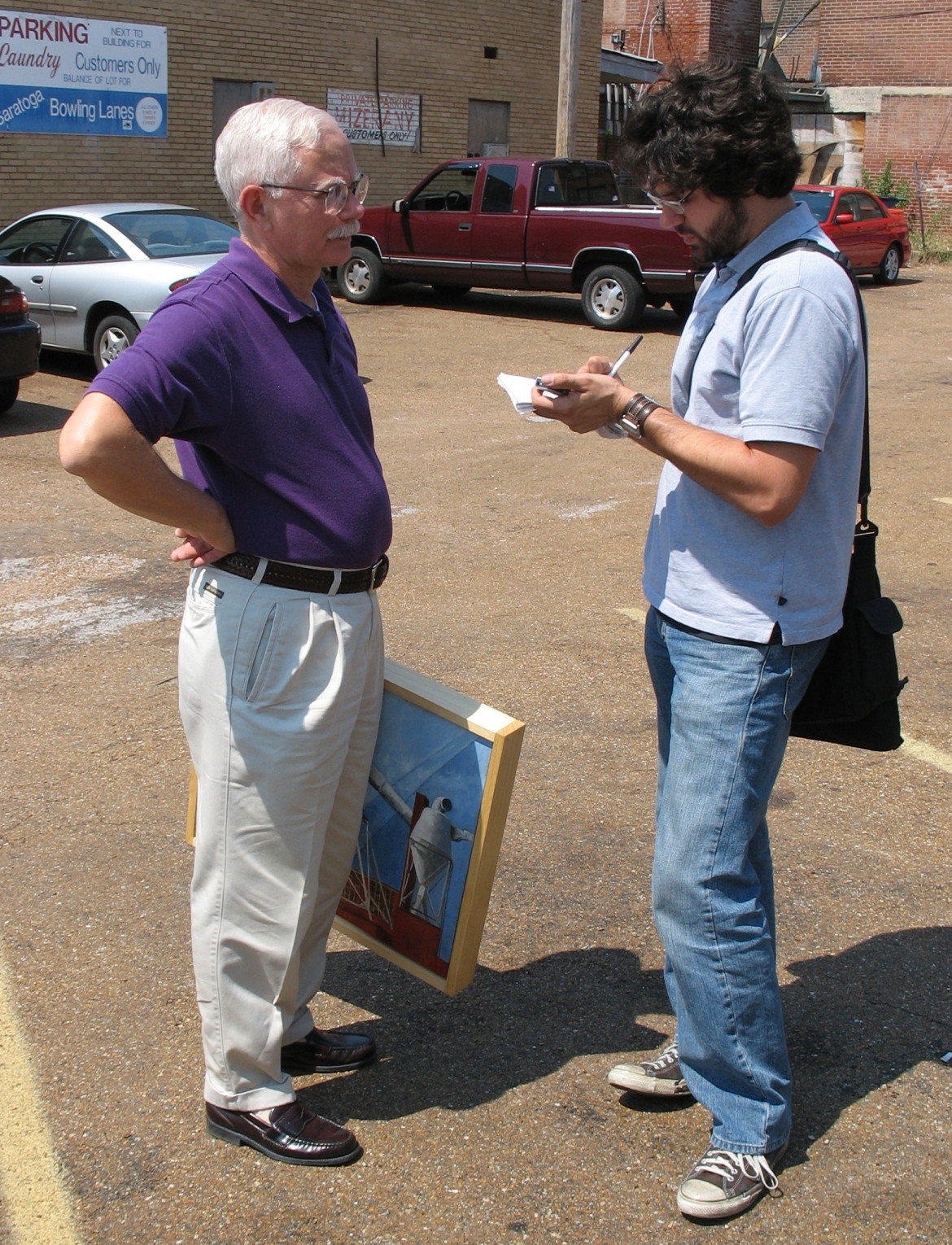 Ryan Heinz of The Mid-County Journal interviews the artist Steve Turner. Ryan’s front page article was the best publicity we could muster in 2006. 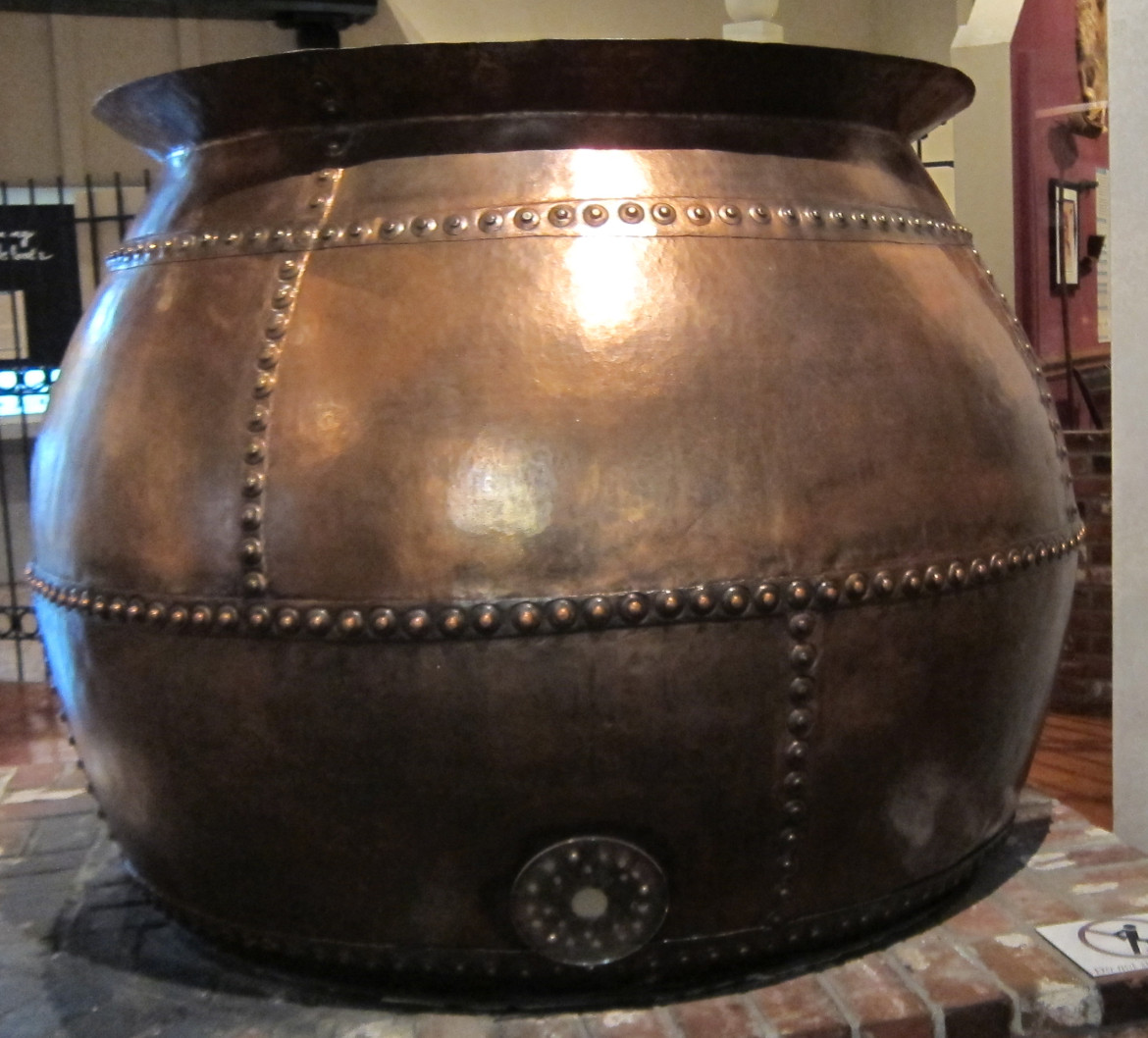 On a visit to the Missouri Historical Society I was struck by the similarity of this old brew kettle to the Maplewood Cyclone. Both were composed of large sheets of metal joined with rivets. If the Cyclone had been made of copper would we have saved it? If the answer is yes, we were just one faux copper finish away from keeping it. 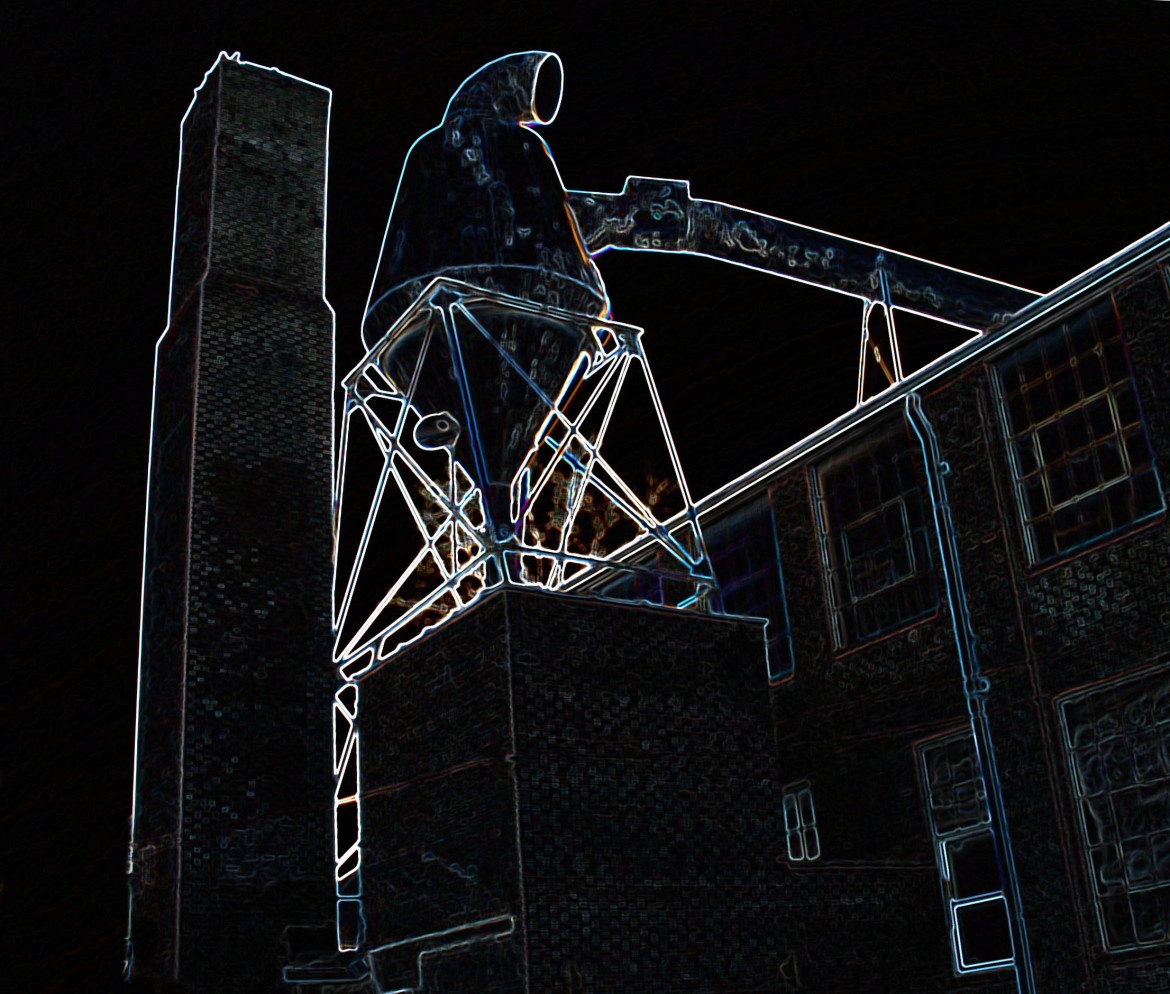 A few residents apparently had trouble imagining the Maplewood Cyclone without peeling paint. Here Photoshop makes it easy to imagine it with a little neon added. Now that would have been something to see. 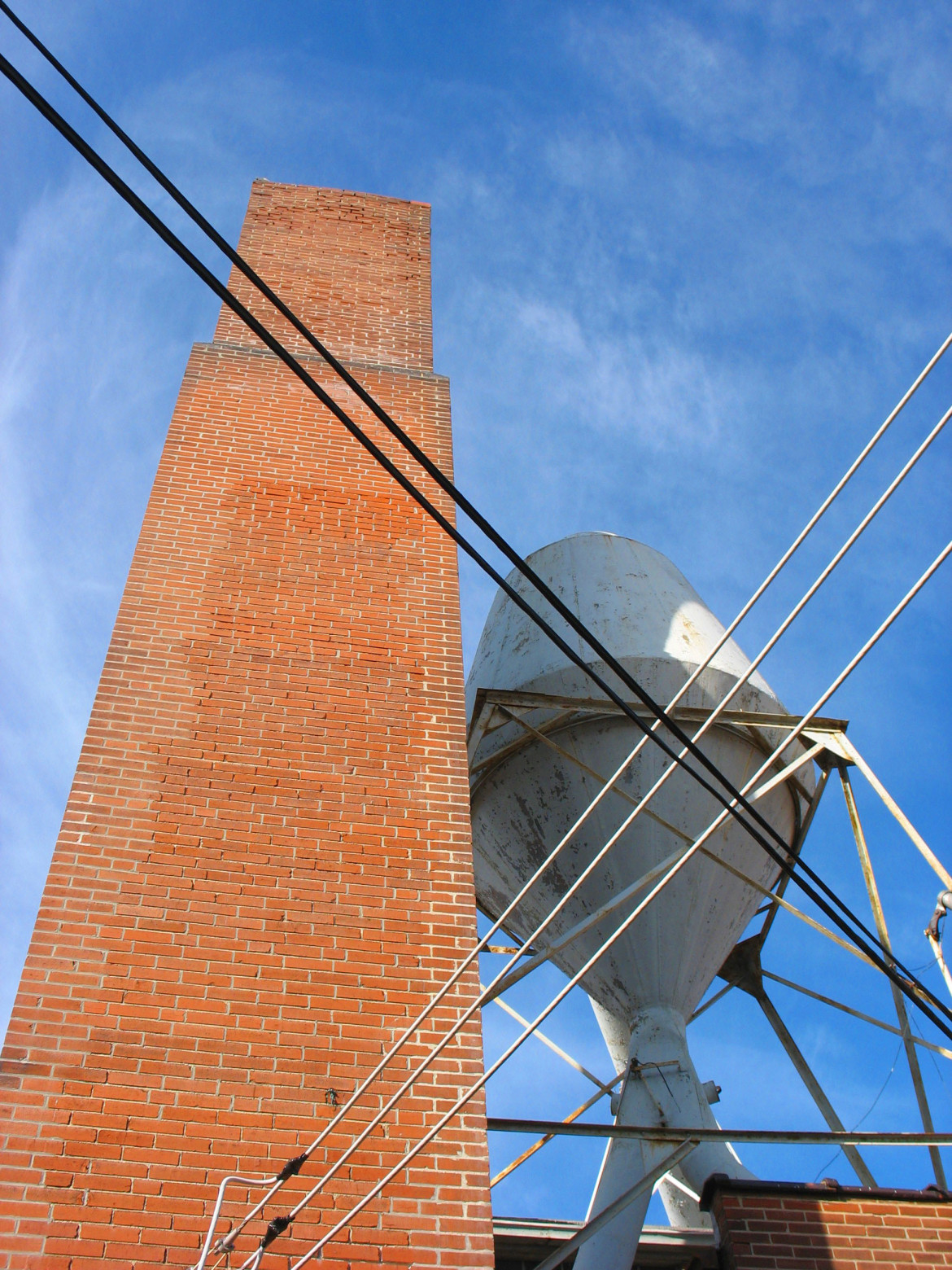 This photo with the wires forming an x across the Cyclone seemed to foretell what lay ahead. 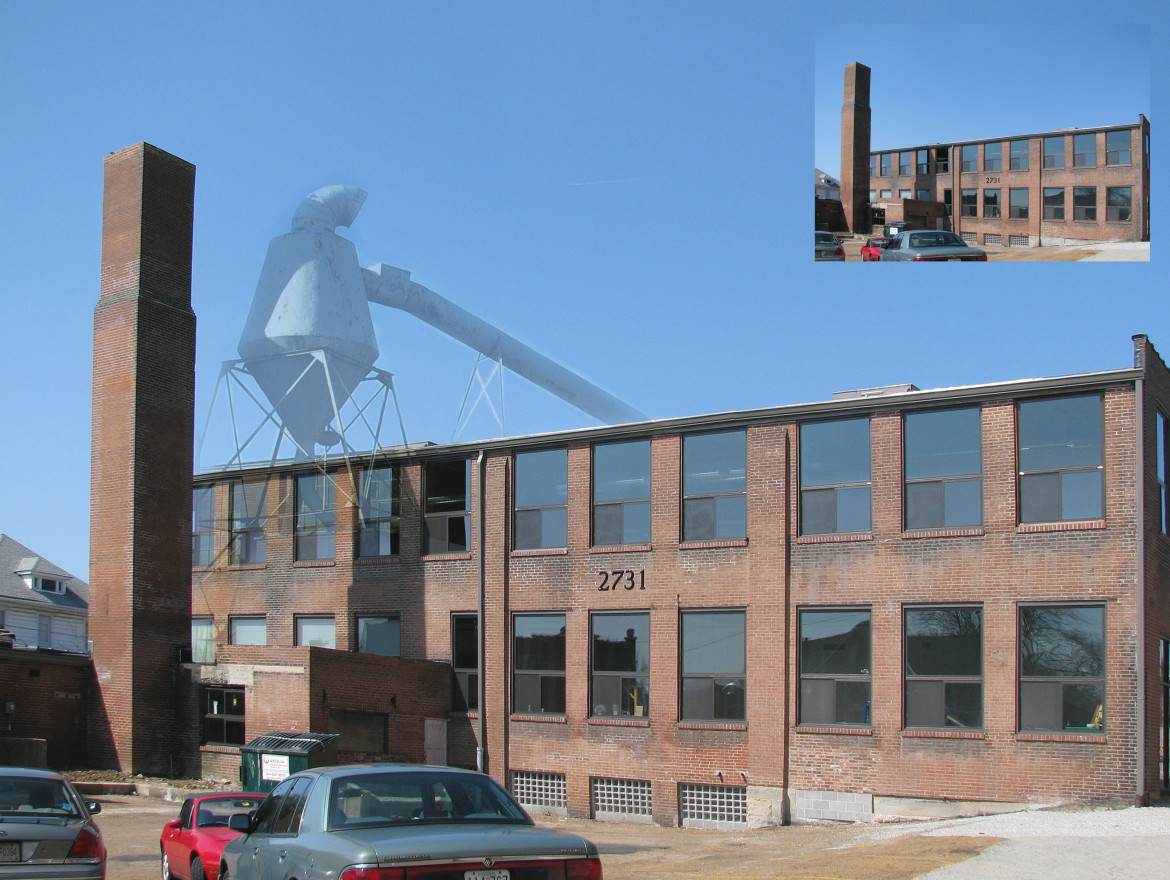 I am very grateful that the Mill, it’s chimney and boiler survived the renovation but the scene definitely lost power, drama and history when the Cyclone was removed. 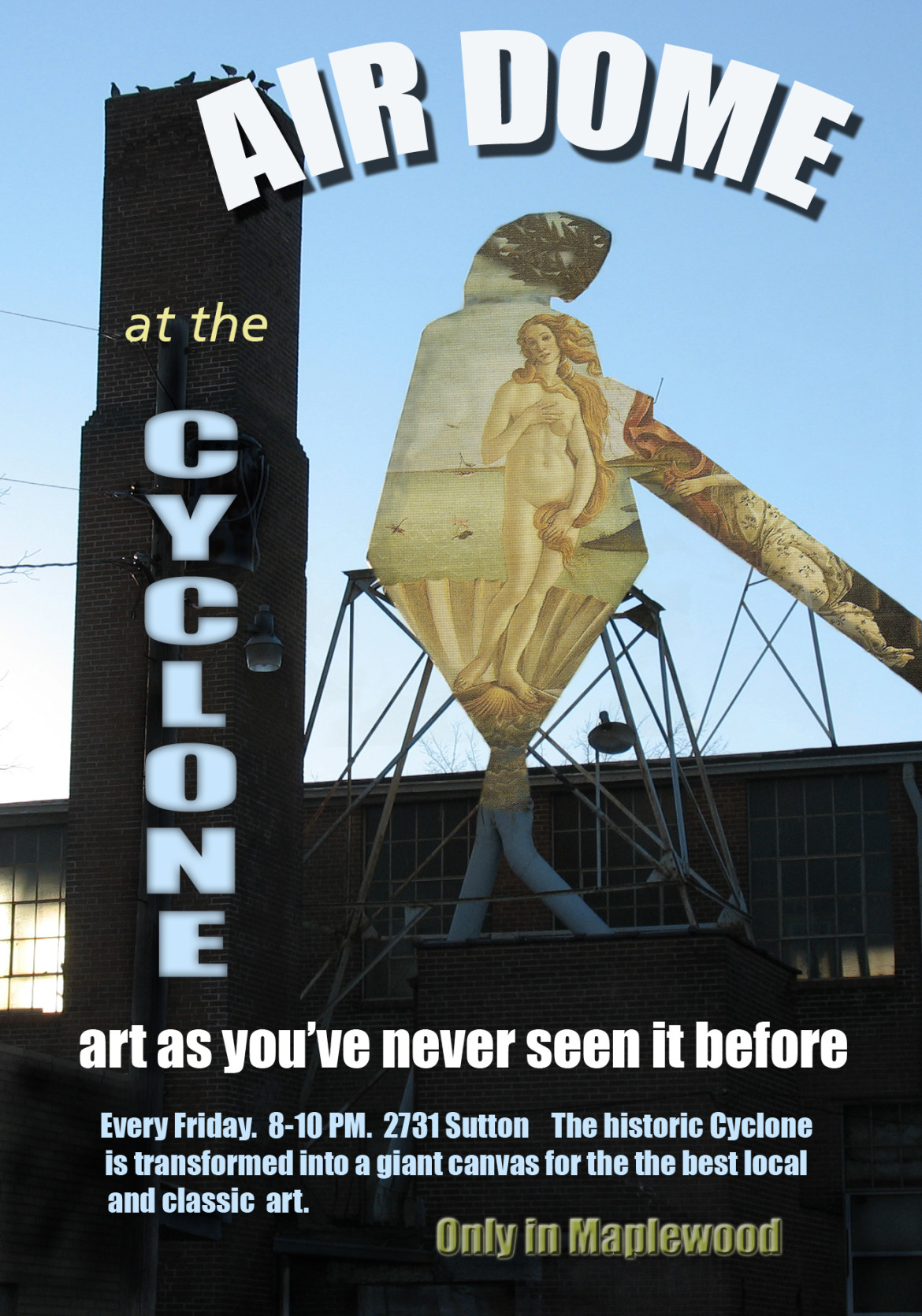 This is the poster I created anticipating our event that unfortunately was not to be. Air Dome was a generic term denoting an outdoor theater in the early to mid-20th century. I used Botticelli’s, “Birth of Venus” to demonstrate what the Cyclone could look like with projected images and also to emphasize the femininity of the Cyclone compared to it’s masculine companion, the chimney. I admit I had fun with this. 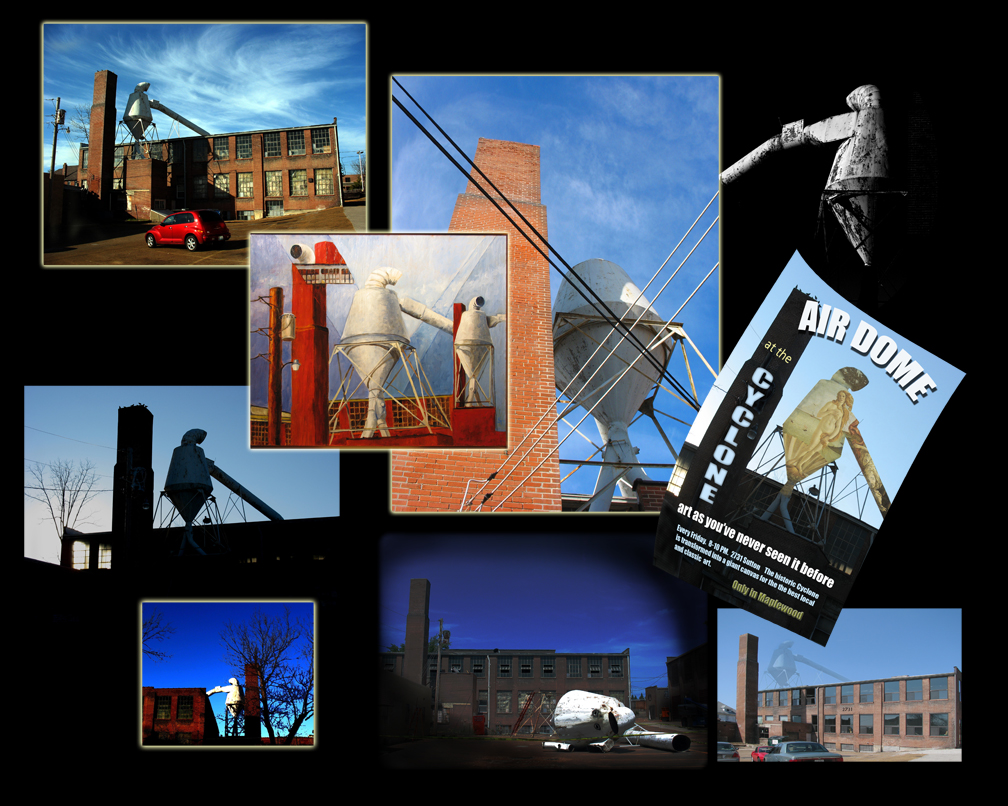 Here is a collage, the story in pictures that sort of sums the whole thing up. All of the photos in this post are by Yours Truly.

5 thoughts on “Maplewood History: The Last Word on the Maplewood Cyclone – Part 3”