For much of recorded history it would have been inconceivable to build an important building and not include sculpture, relief carvings, and artistic paintings in the design.  This started to change early in the 20th century when buildings began to be created with little or no exterior ornament. I call this the crime of no ornament.

Many Art Deco (about 1920 – 40) buildings had interesting exterior sculpture-in-the-round (statues) and relief sculpture but the tide had turned.  By the end of WWII most new buildings had little or no ornament. A tremendous loss in my mind.  Architecture is a perfect place to display art.  I’d bet many folks would have little contact with sculpture if it weren’t staring down on them from some of our historic structures.

The type of ornament many of Maplewood’s historic buildings have is known as terra cotta.  It means cooked earth.  It’s made pretty much the same way as a brick.  Packed into a mold to form the shape, then removed from the mold and fired. Finally a glaze would be applied and fired to create a super, long-lasting, protective surface.

Several readers have mentioned that this is a subject they’d like to see commented on.  There is one in particular who I know will be interested.  He is my friend, the observant wanderer, Mr. Tom Bakersmith. These are for you, Tom. 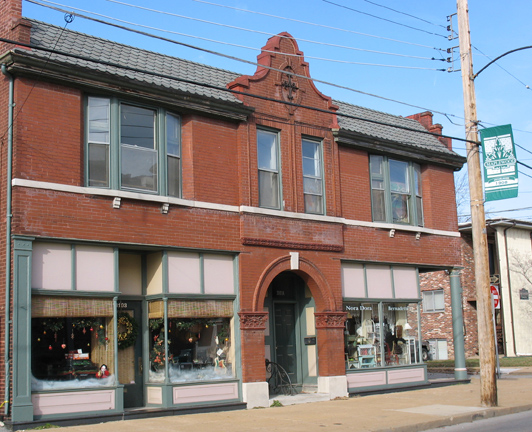 The 1912 Maplewood Directory has A. Schwartzmann operating either a grocery or a butcher shop at 3103 Sutton and W.F. Katzky, a pharmacist, at 3101 Sutton on the corner.  A hunch of mine that Katzky might possibly have been connected to the later Katz Drugstore turned out as hunches usually do to be completely wrong.  A quick internet search reveals that this Katzky apparently split for Oregon.  He seems to have done well in Portland operating a drugstore that apparently survived him. This building, constructed in 1900, has long been a favorite of mine. Sad that it’s nearly impossible to get a good shot of it with all of the cursed wires in the way. 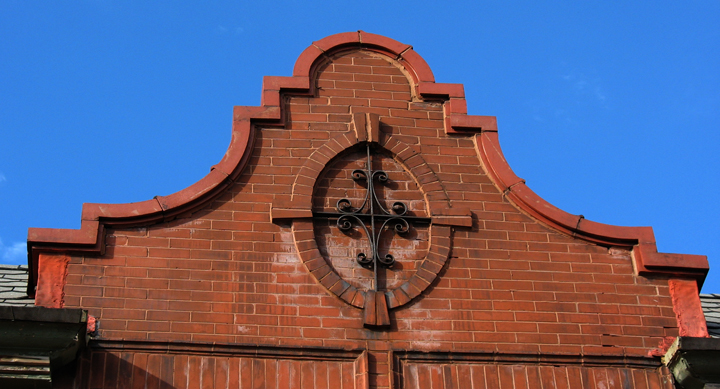 The parapet is capped with terra cotta coping. That it still has its original wrought iron work is especially nice. 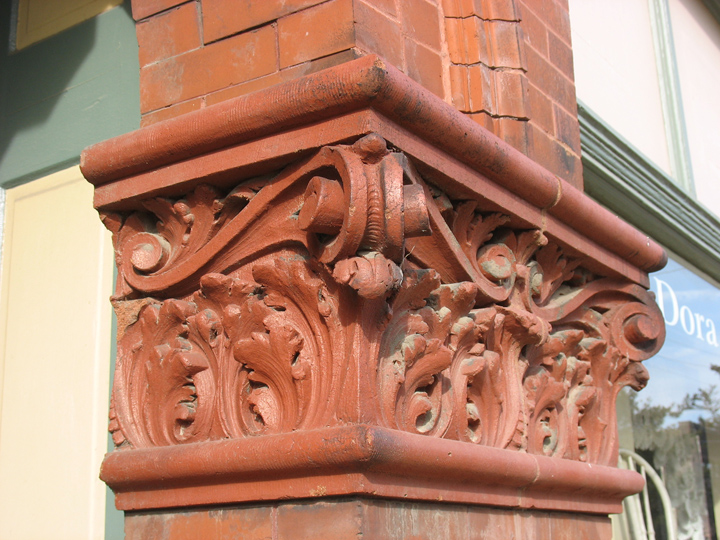 The capital on this brick pillar is an example of some of the finest terra cotta in Maplewood. The pillar supports a brick arch over the entrys to the second floor apartments. The arch has a limestone keystone. The design of the capital looks to me like acanthus leaves topped with scroll work, two architectural motifs that are positively ancient. Look closely at the top and bottom half round moldings. You can see the lines of a rake, a common clay tool, that a worker used to score the clay in order to give it more texture.  Many of the grooves in the acanthus leaves were made by the sculptor’s fingers.  This is truly handmade. 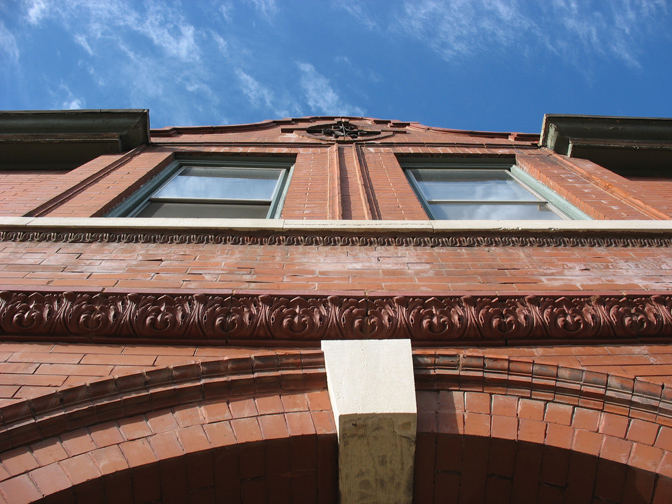 In this image you can see the limestone keystone with a course of acanthus leaves right above it. This is about the only way you can get a shot without the damn wires. 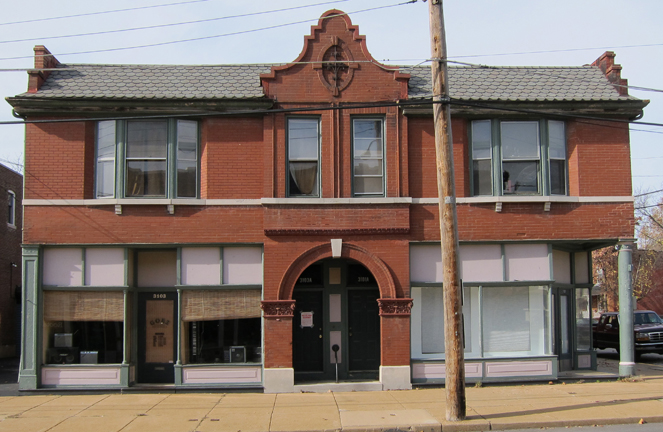 Here’s a nice straight-on shot that shows how beautifully balanced the facade is. Notice the round cast iron column on the right and the rectangular one on the left. Wouldn’t it be wonderful to get rid of that utility pole? Anybody listening? 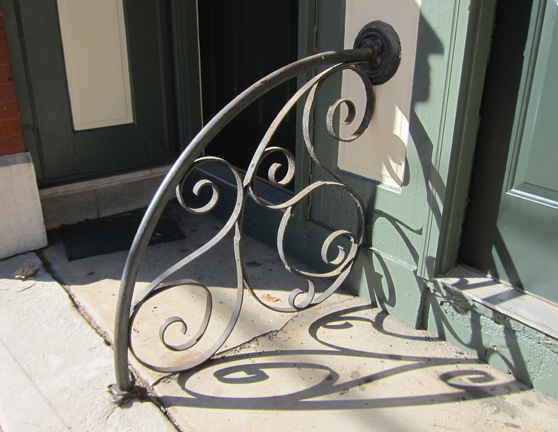 A great little wrought iron railing between the two doors to the upstairs apartments.  The walls and ceiling of the entrys are paneled as well. 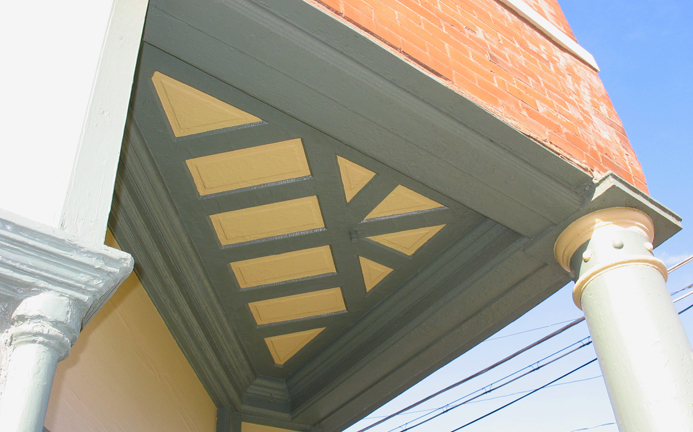 A super cool triangular paneled ceiling on the corner entry.  I love the cast iron stuff on some of these old buildings like the round column on the right.  The smaller round column by the windows on the left, if I remember right, is wooden. 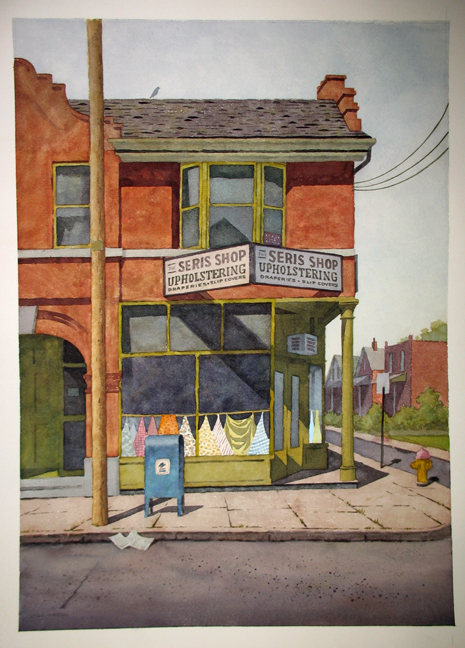 Someone else liked this building as much as I do. That would be Maplewood’s own virtuoso watercolorist, Stan Masters. Courtesy of Carlene Masters. 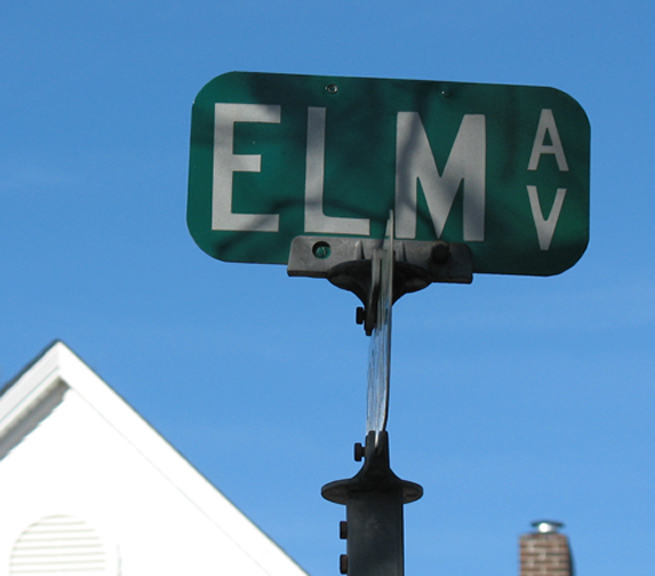 This building which ought to have a name but doesn’t, is at the corner of Elm and Sutton. This image really doesn’t have anything to do with it. I liked it because I thought it was a good symbol of our Maplewood frugality. I’m not sure we still have that.

And finally an image of the “smile and wave” part of one of the many Maplewood history hikes ably led by the now semi-retired historian of St. Louis County, Esley Hamilton assisted by yours truly.