Although I named this series Whole Lotta Terra Cotta, we really don’t have a whole lot of it here in Maplewood.  We’ve seen that we have some very nice examples.  I’ll include many of the remaining ones in this post. Hopefully the readers will conclude that they are worth protecting and require close attention so they don’t disappear.

Our buildings are a part of Maplewood that can survive. We won’t. Owners of commercial property can die or just lose interest and move on.  The changes they make to our buildings endure. Part of this mission that I have set for myself is to let you folks see what we have that is worth preserving.

We can tighten up a bit on what we expect of owners of historic properties. It worked in Soulard. Strict controls on historic buildings have completely turned a failing community around. We are no second class city. We have a wonderful location and property values have begun to reflect that.

We don’t have to become a museum but if we don’t figure out how to protect our historic resources we can expect another debacle like the Harper Pharmacy cabinetry destruction. Generations of Maplewoodians knew and appreciated that historic interior. Now only pieces remain due to a dunderheaded decision by a couple of folks who should know better. 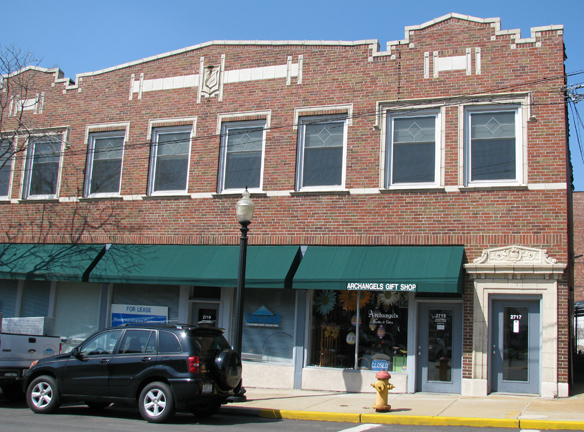 This is just a very nice, attractively proportioned building on Sutton at Marietta. It doesn’t have a lot of terra cotta but what it does have is pleasing to the eye.

If one looks closely at this piece over the entry to the second floor, we can see some familiar elements shared with other pieces around town. Specifically the scrolls on either side of the sort of sash-covered egg (or maybe in this case, apple) shape and, of course, a couple more scrolls leaning up against either end. 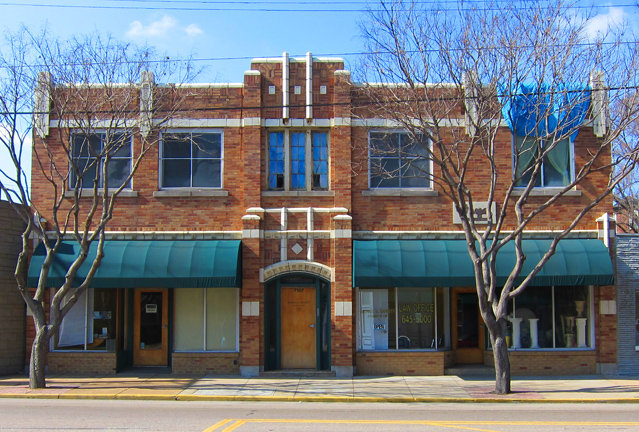 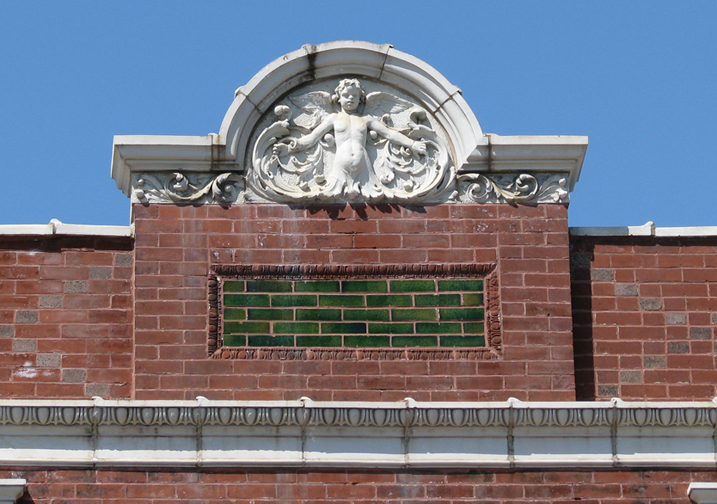 This atop the parapet of our first City Hall building on Sutton. The baby has wings so it must be a cherub, I suppose. I haven’t the faintest idea what an ornament like this could signify. Cherubs have been around at least since the baroque period (look it up. I can’t do everything for you).  While I’m not much a fan of cherubs, I do like the two examples of egg-and-dart molding seen here.  Egg-and-dart molding has been used as an architectural ornament for at least 2,000 years.  That’s popular!  There are many examples on our buildings. It has been thought to represent at its most basic, feminine and masculine.  That’s cool.  Others believe it represents peace and war.  Whichever, its origin is lost in time.  Or at least I haven’t found record of the earliest known example. 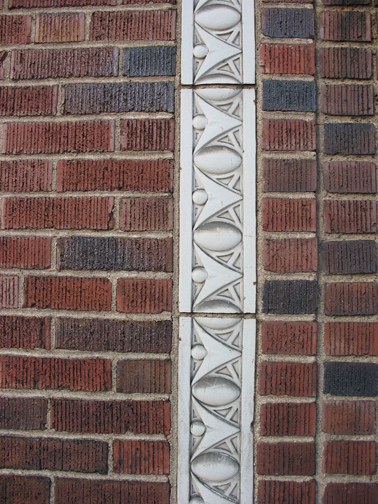 Here is an Art Deco example of egg-and-dart molding on a building in the 7100 block of Manchester. 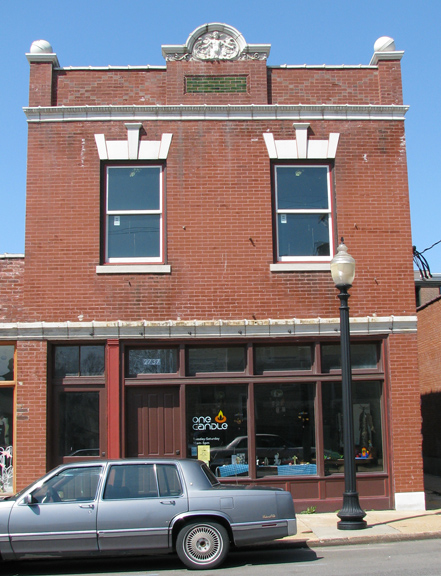 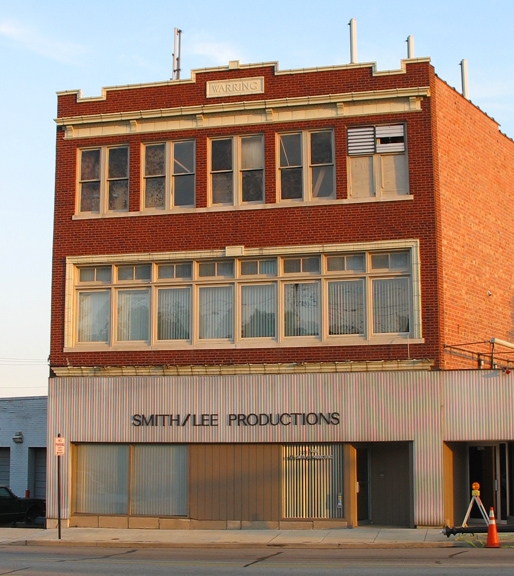 The Warring furniture store building in the 7400 block of Manchester has some nice terra cotta trim remaining on the upper stories. 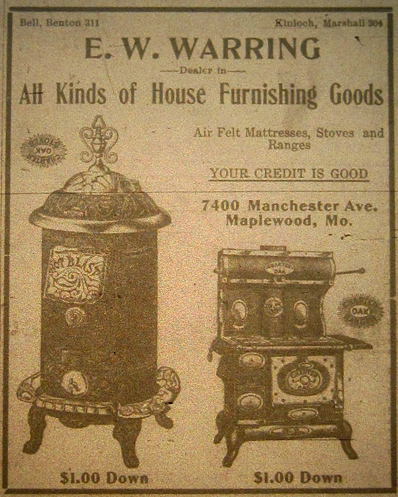 This ad from the 1915 Maplewood Champion newspaper suggests that the store was once on the corner in the same building as the Tiffany Diner is now. 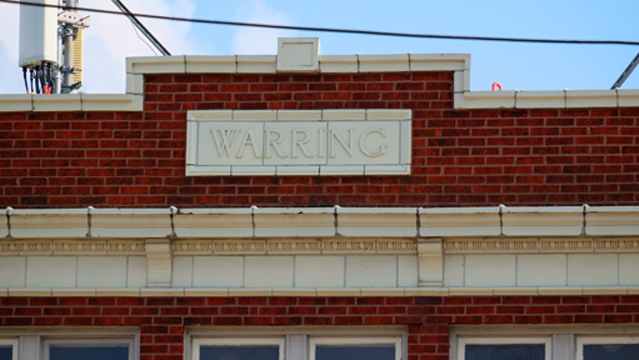 This close up of the terra cotta on the parapet reveals… surprise… egg-and-dart molding again. 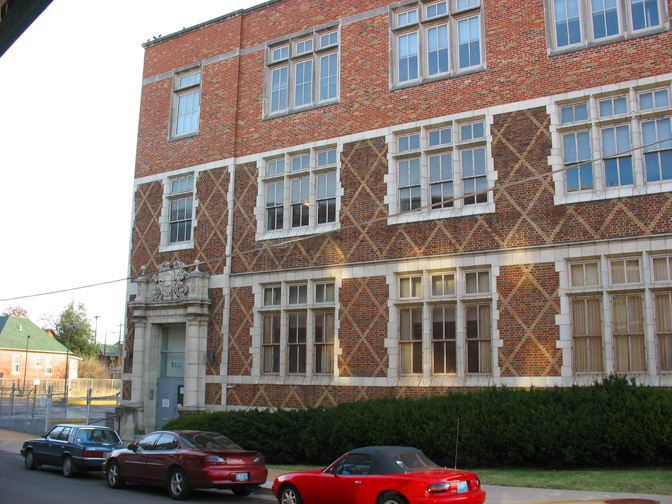 Our Bell Telephone building on Lanham is a pretty neat building.  Should AT&T or whoever owns it now ever lose interest in it, it is definitely worth saving.  The ornamental entry is especially cool. 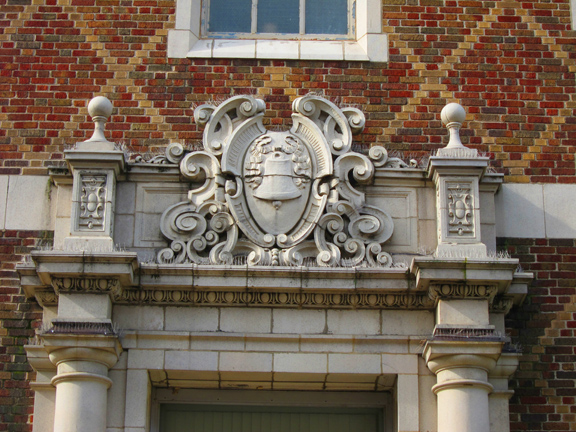 Have a look at this exuberant, over-the-top piece of sculpture. The central egg sports the old familiar Bell Telephone logo. What’s happening on either side of it? It must have been a case of scroll sculptor gone wild. He’s got so many scrolls on there that they appear to be spawning. With that in mind I get a laugh from this every time I look at it. Keep an eye on it. Even though corporations are people you’ve got to watch them. They’ve been known to do things that most people wouldn’t. Hope you enjoyed the terra cotta series. I’m ready to change the subject for awhile.  PS. I know you caught the egg-and dart molding just below the scroll work pileup.