Here at 40 South News we care about our readers. When the subject is terra cotta, you don’t have to go to the terra cotta…we bring it to you. So sit back in your comfortable chair and prepare to have another digital armload of terra cotta dumped right in your lap.

We are lucky in Maplewood to have several outstanding historic commercial buildings.  A few of these like the subject of the last post, 3101-03 Sutton, are fortunate to have survived with much of their original details intact. The Maplewood Theater/Scheidt Hardware building is another one.

The theater business must have been tough. Built in 1910, it was used as a theater building for only a short time. Doing business as the Maplewood Theater when it opened, it closed 3 or 4 years later, reopened in 1915 as the Maplewood Lyric Theater, closed again and was sold to Emil L. Scheidt in 1916.

Emil L., one of our towns many hardwarians when he opened, founded a solid business that would eventually trump his competitors. His son, Emil C. ably succeeded him and passed it to his son, Robert. Bob, who did time as a Maplewood councilman, has only recently retired and preserved this Maplewood institution by selling it to two of the nicest guys out there, Ben Reynolds and George McCandliss.

If you’re not buying everything you possibly can at Scheidt Hardware ask yourself why?  These two fine fellows on top of making shopping for your hardware and household needs as convenient as possible are preserving one of our absolute best historic buildings. 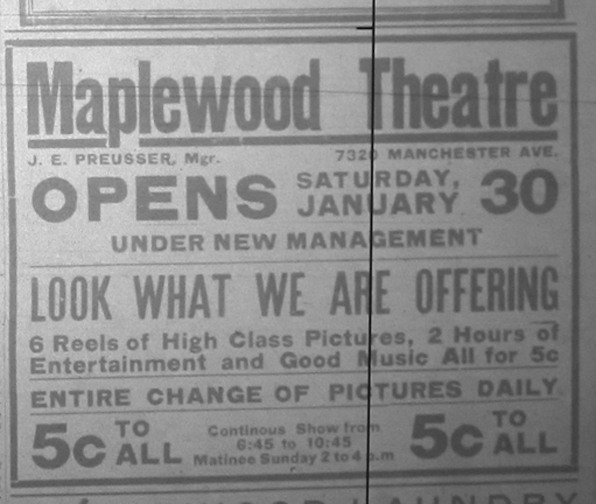 William Bernie Powhatan was running the Maplewood Theater when it opened.  He may have been the owner but I’m not certain. This is an advertisement announcing the reopening after a stint as the Maplewood Lyric Theater. From the 1915 News-Champion. 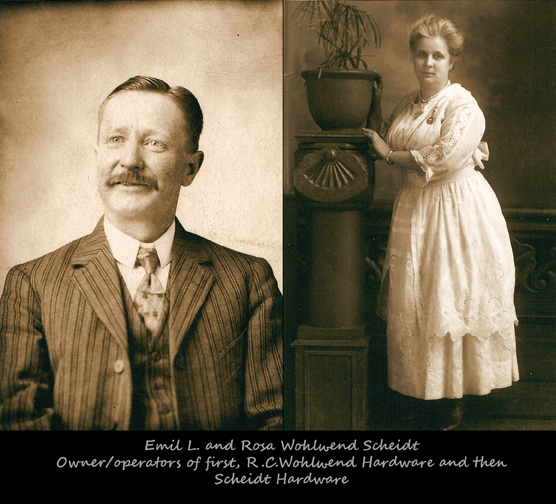 Emil and Rosa converted the building from its use as a theater to a hardware store. This meant leveling the sloping theater floor. Courtesy of Jessica Ernst. 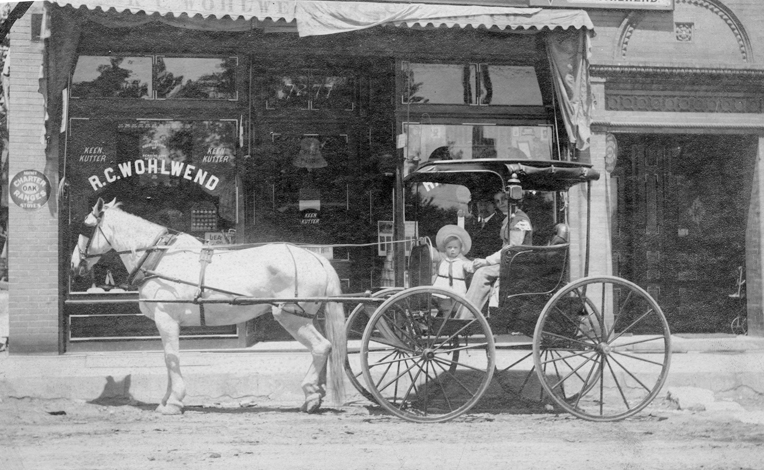 Emil and Rosa with their son, Emil C. in front of their first hardware store, which they opened in 1907, at 7277 Manchester. The name of their horse was not recorded. Courtesy of Jessica Ernst. 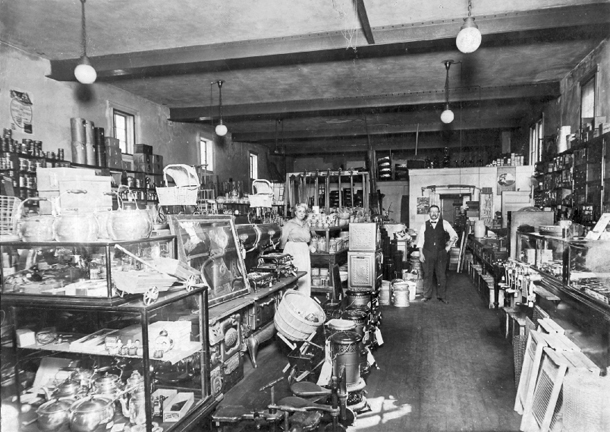 The interior of the store in 1919. Courtesy of Bob Scheidt. 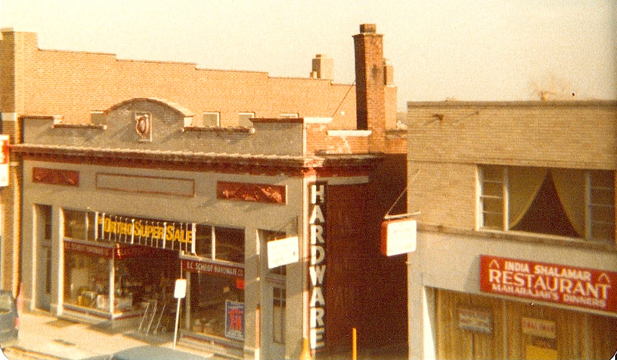 This photograph must have been taken from the top of the hated K Mart structure in the 1970s. The photographer would have been standing at the edge of the K Mart store parking lot directly above a row of charmless commercial spaces. Courtesy of Bob Scheidt. 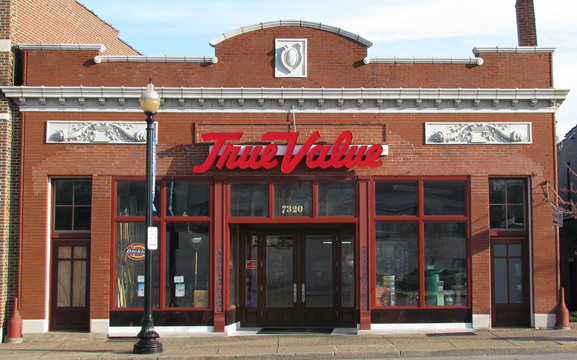 It was 2008 when this shot was taken by yours truly. 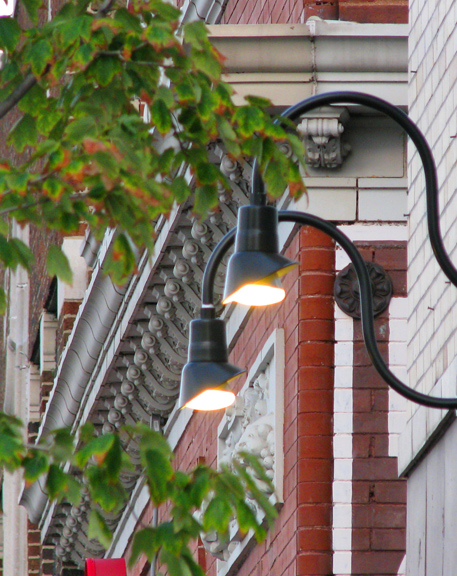 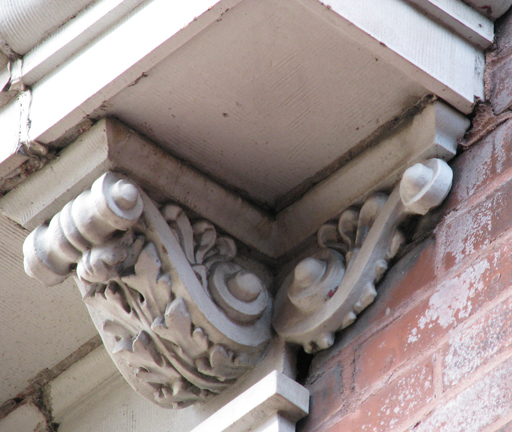 Seen up close the brackets are composed of acanthus leaves and scrolls. The same elements that were in the capital shown in the last post. They’ve been popular architectural elements for about 2500 years.  Why not?  They look great.  You might recognize the scroll as being a feature at the top of the neck of a violin.

The facade also features not one but two double cornucopias. Wikipedia says they are usually filled with fruit, flowers and nuts. One has to wonder if Bernie Powhatan picked them out of a catalog. 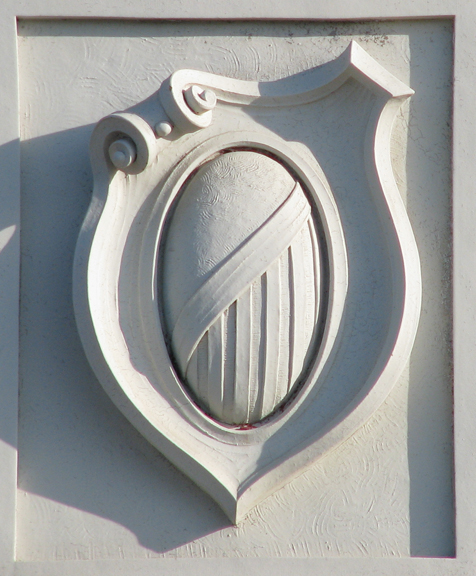 And right in the center is this very interesting shield. I’m not sure what if anything it is meant to symbolize. The half striped egg doesn’t bring anything in particular to mind. At the top are our scrolls again. Notice that even though this shield is finely finished, the sculptors tool marks were left to give the egg and the background texture. 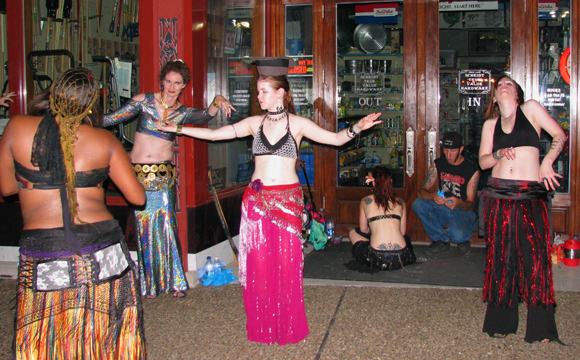 What goes on at Scheidt Hardware after dark? Looks like we ought to stick around and find out. These undulating night denizens were part of one of the Let Them Eat Art events.