If it seems familiar I think I wrote the text below for either our centennial walking tour guide or an earlier post or maybe both.

Whimsical, Exuberant and Arabian?  What in Maplewood could possibly qualify?

All of those adjectives could be used to describe The Browne building at 7156-60 Manchester which has my vote for the most flamboyant façade in the Maplewood business district.

Built about 1922 it was named for Theodore Browne, “Floral Artist”.  His building is bisected by the boundary with the City of St. Louis with one storefront paying taxes to the same and the other paying taxes to Maplewood.

Looking at the Browne never fails to bring a smile to my face.  Imagine sitting in on the meetings between Theodore and his architect.  I can’t.  If they were determined to leave not one square inch of the façade undecorated, they succeeded handily.  Browne’s ads used the slogan “Say It with Flowers.” He apparently wanted to, “Say It with Terra Cotta” as well.

The pointed arch over the opening in the center of the building is very cool as is the B&W tile checkerboard just above it.  Two-toned and two-textured bricks are used all over in a variety of configurations.

Much of the building’s ornament was apparently inspired by plants and flowers.  That makes sense.  He was a florist.  At the top flanking a sort of reverse arched parapet are sculptural bouquets of flowers resting on flat spots of the glazed terra cotta coping.  A molding that appears to be a repetition of a stylized columbine flower (I’m guessing) was used in several places.  Numerous other floral themed plaques and tiles abound.

The reasoning behind the choice of some of the other ornament is hard to guess.  For example just above Browne’s name is a shelf with two items on each end that look to me a lot like those clay pipes we nearly all have somewhere under our yard.  If that’s not what they are, then what are they?

Also centered high on the façade just below the parapet is a vent that looks suspiciously like a floor drain.  But weirdest of all are the decorations on top of the pilasters on either side of the façade.  They appear to be five burning candles (What else?) on each side.  How or if they are symbolic of the florist trade, who knows?  They are another goofy mystery that contributes to the uniqueness of our community.

Browne and his wife Emma lived on the second floor until he sold the building sometime between 1932 and 1934.  Other tenants have included the Jones Commercial College and the People’s State Bank.

Thanks to Esley Hamilton for the historical information. 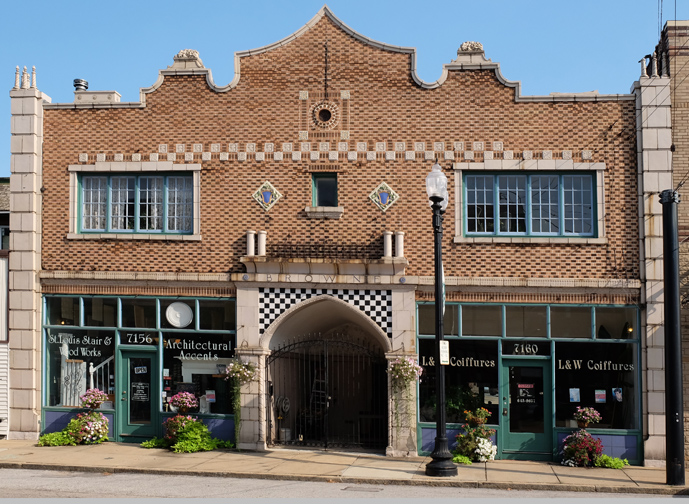 I’m much in favor of the sort of aesthetic sense that created this facade.  It fell out of favor for awhile but I don’t think it ever will again.  This is architecture as visual entertainment. 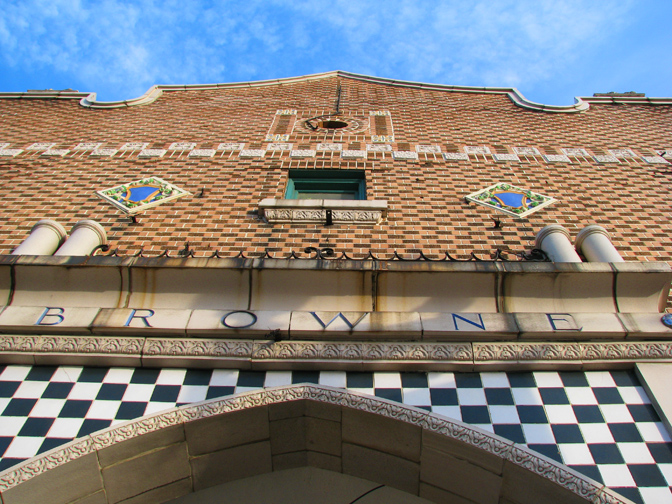 It’s a visual smorgasbord. I hope the owner is doing a good job of maintaining it. That’s a lot of little pieces to keep track of.  The facade hasn’t lost anything in the last 8 or so years according to my photographs. 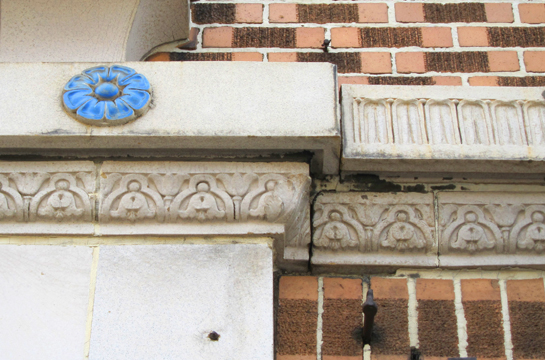 Several of the aforementioned floral-themed moldings and ornament.  Makes sense for a building built by a florist. 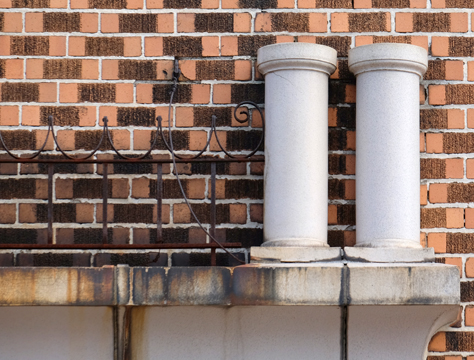 But how about these? They look to me like sections of clay drain pipe. This might be architecture for a plumber. 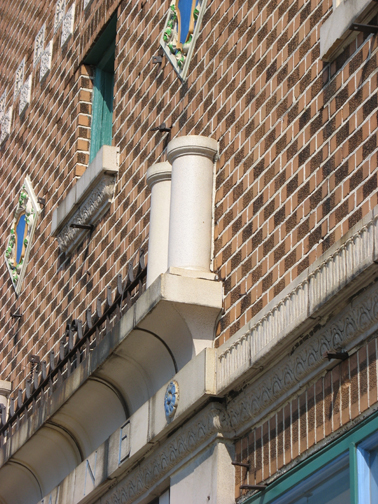 Seen from a slightly different angle, they still look like clay drain pipe. A nice piece of the original iron survives between them. 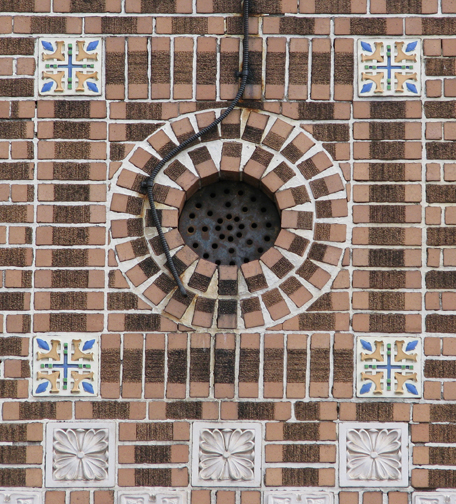 This has to be for ventilation but it looks quite a bit like a floor drain too. There are so many decorative tiles I don’t have room here to show them all. 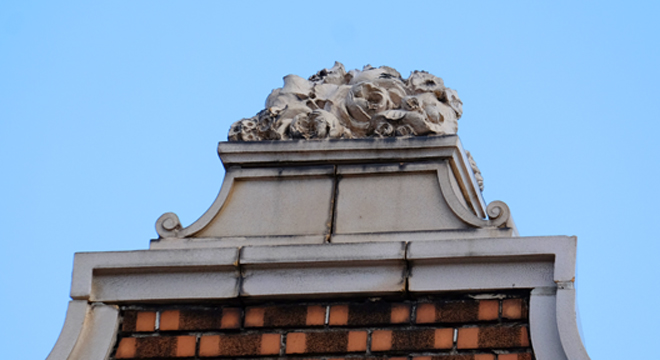 I think these must be terra cotta flowers sitting on the parapet coping.  The bi-colored bricks are interesting too.  Smooth on each end but rough in the middle. 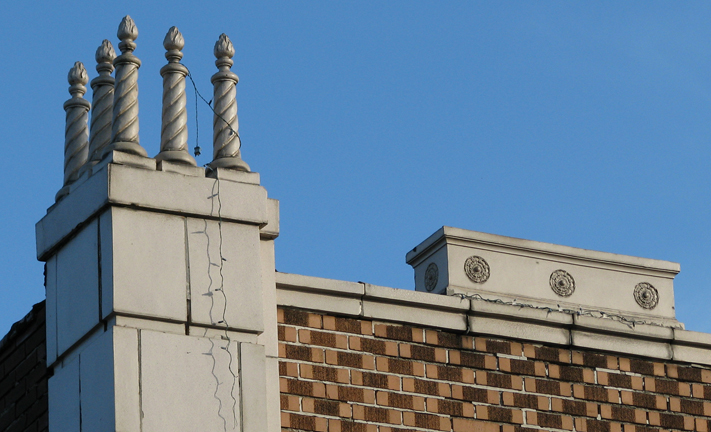 The ornament I’ve shown is amazing and I didn’t even mention the checkerboard over the center entry. It looks great but who would have thought to put it there? Anyhow I’ve saved the best for last. There are five what appear to be lit candles atop each corner of the facade (the westernmost corner has four but the owner told me some years back that he still had the other one). These would be so easy to knock off that it is incredible they survived the modernist years. Every time I look at them I have to wonder, “Just what in the world were they thinking?” 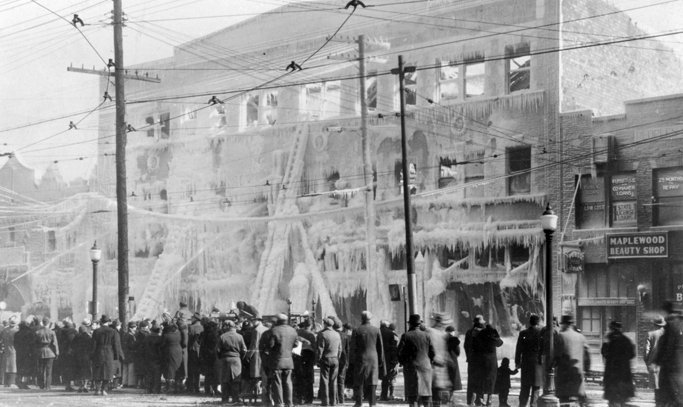 This photo along with the letter that follows was dropped off at city hall. The Browne building is visible on the left.  This might have been when the candle got knocked off. 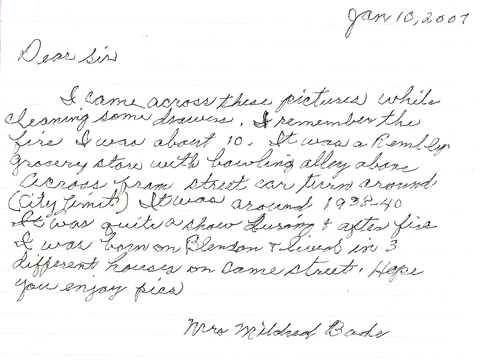 Thank you, Mildred, for sharing this with all of us. That building now has just two stories.  Photo and letter are now in the collection of the Maplewood Public Library. 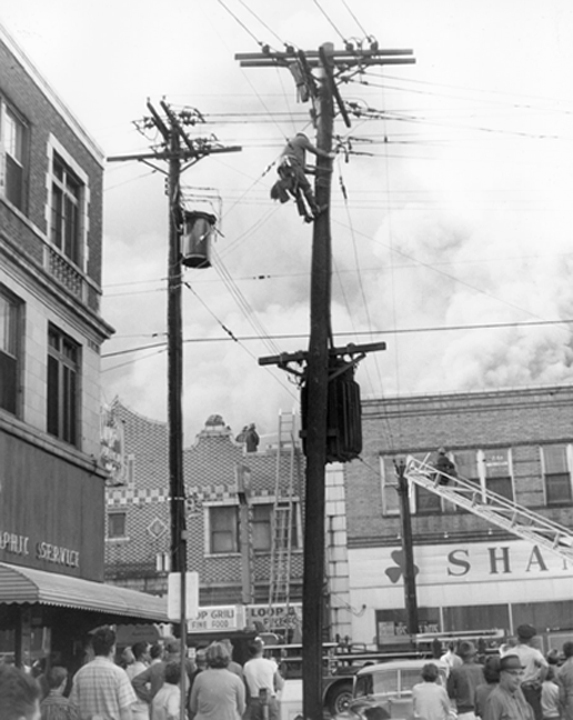 This was the Shamrock Furniture store fire, I recall from the library clippings.  Maybe this was when the candle got knocked off.  Courtesy of the Maplewood Public Library.