Perhaps this post should be titled something like Just Over the Border of Maplewood… History.  I think the intersection of Manchester and McCausland is where the Maplewood business district truly begins.  No matter that it is a block east of our actual border.  It was either within the survey of the farm of our pioneer settler, James Sutton, or right on the edge of it.

This image I discovered while looking through the posts by Joe Sonderman on his Facebook page, Vintage St. Louis and Route 66.  It is a fascinating collection that he has assembled.  This is not the first time I’ve found an historic image related to Maplewood there.

This particular image stopped me in my tracks. I thought this could not possibly be the intersection of Manchester and McCausland.  But it is. There are even street signs on the corner.  Just look at McCausland. It looks like nothing more than a dirt track through a farmer’s field and yet it has streetlights!  On the Facebook page, readers commented that most of the buildings are still there.  I had to go and see for myself.  Guess what?  They are. 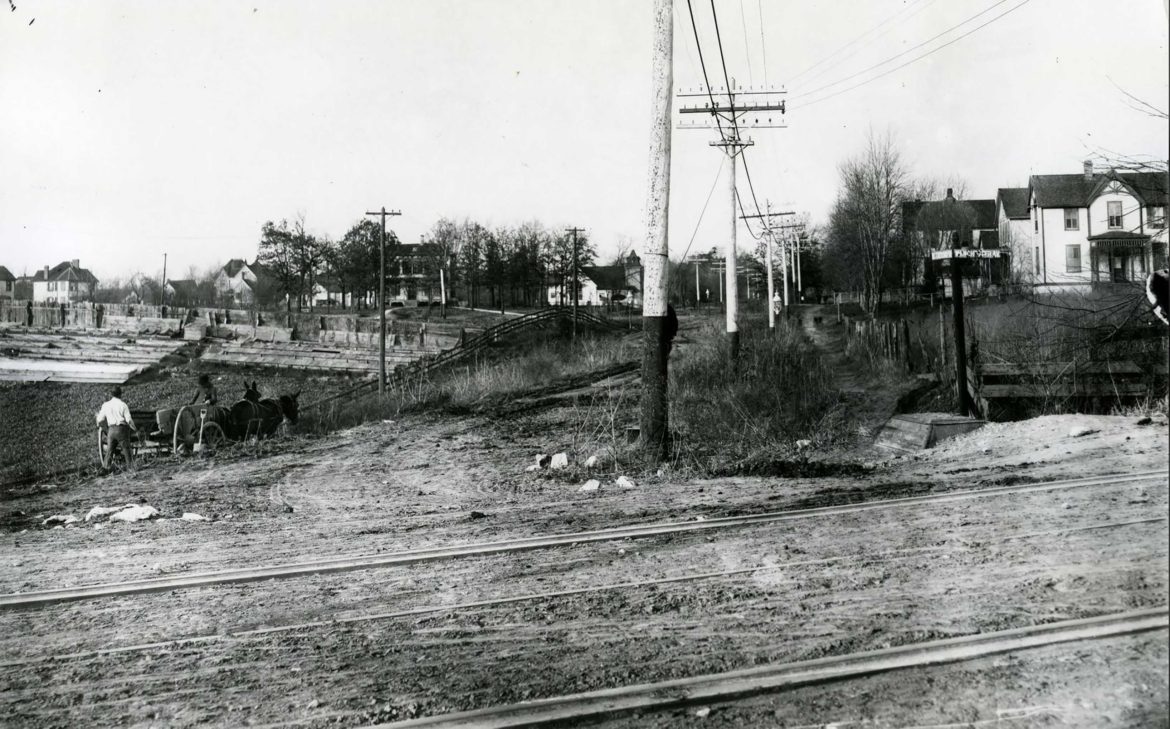 When I first began to try and decipher this image, I supposed from the condition of the roads that it must have been taken around 1900 before the advent of the automobiles.  A little research proved that supposition wrong. 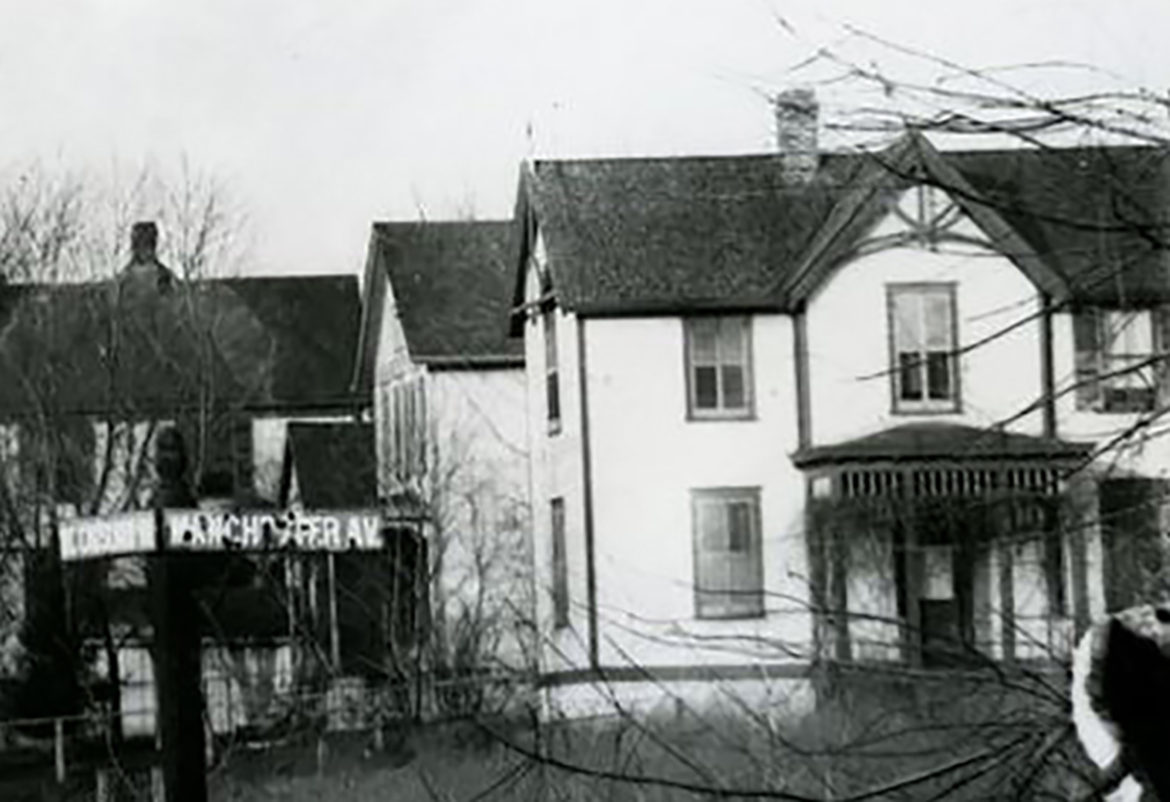 According to Zillow or one of those Zillow-like websites, these two homes were built in 1913. There were many automobiles around by then.  Production of the well known Ford Model T began in 1908.  Today the address of the home in the foreground is 2220 McCausland.  The one directly behind it is at 2214.  When the first home was built it faced Manchester.  Then later the front yard was developed and the address was changed to McCausland.  Note the 2 over 2 windows.  Meaning 2 panes of glass in the top sash and 2 panes in the bottom sash as well.  One of the great features of this amazing image is the inclusion of the street signs.  They leave no doubt about the location. 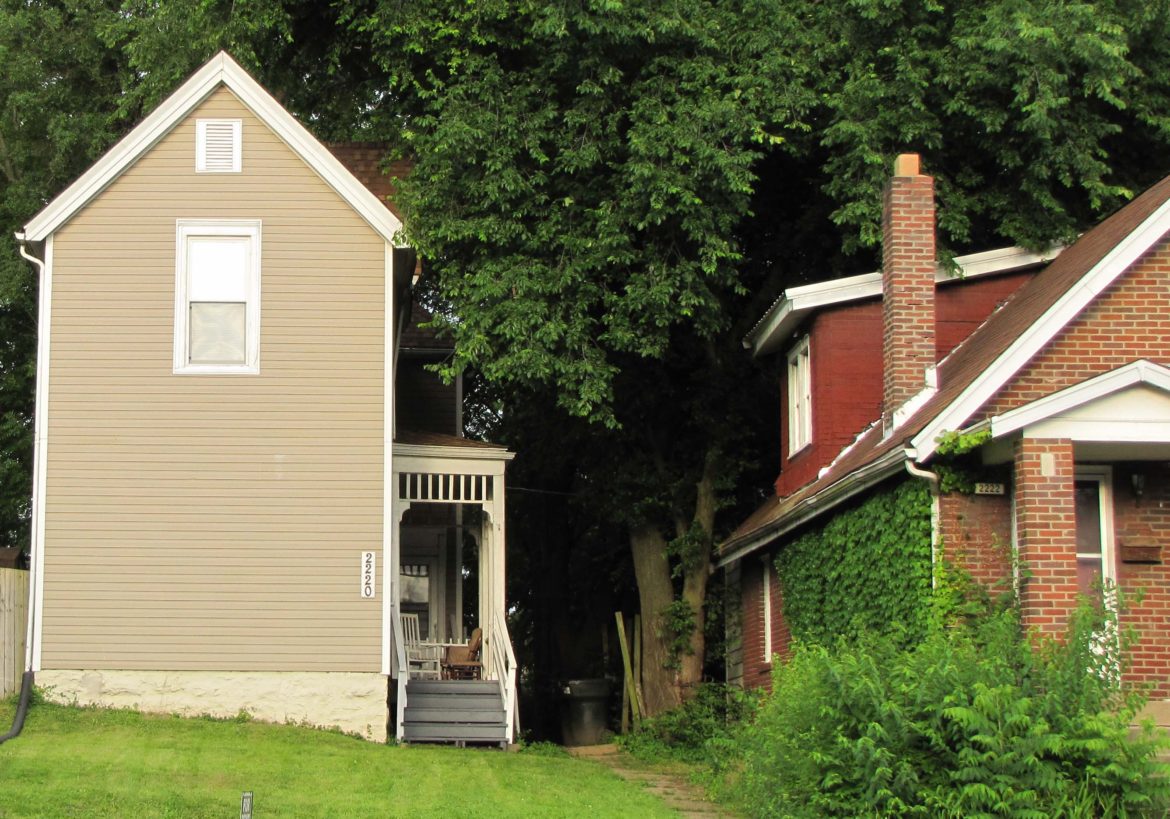 The western elevation of the home in the foreground now at 2220 McCausland. It lost a window and gained several buildings in the front yard.  One home is visible. Remember the 2 over 2 windows?  Gone.  It also lost some interesting gingerbread in the front and side gables. 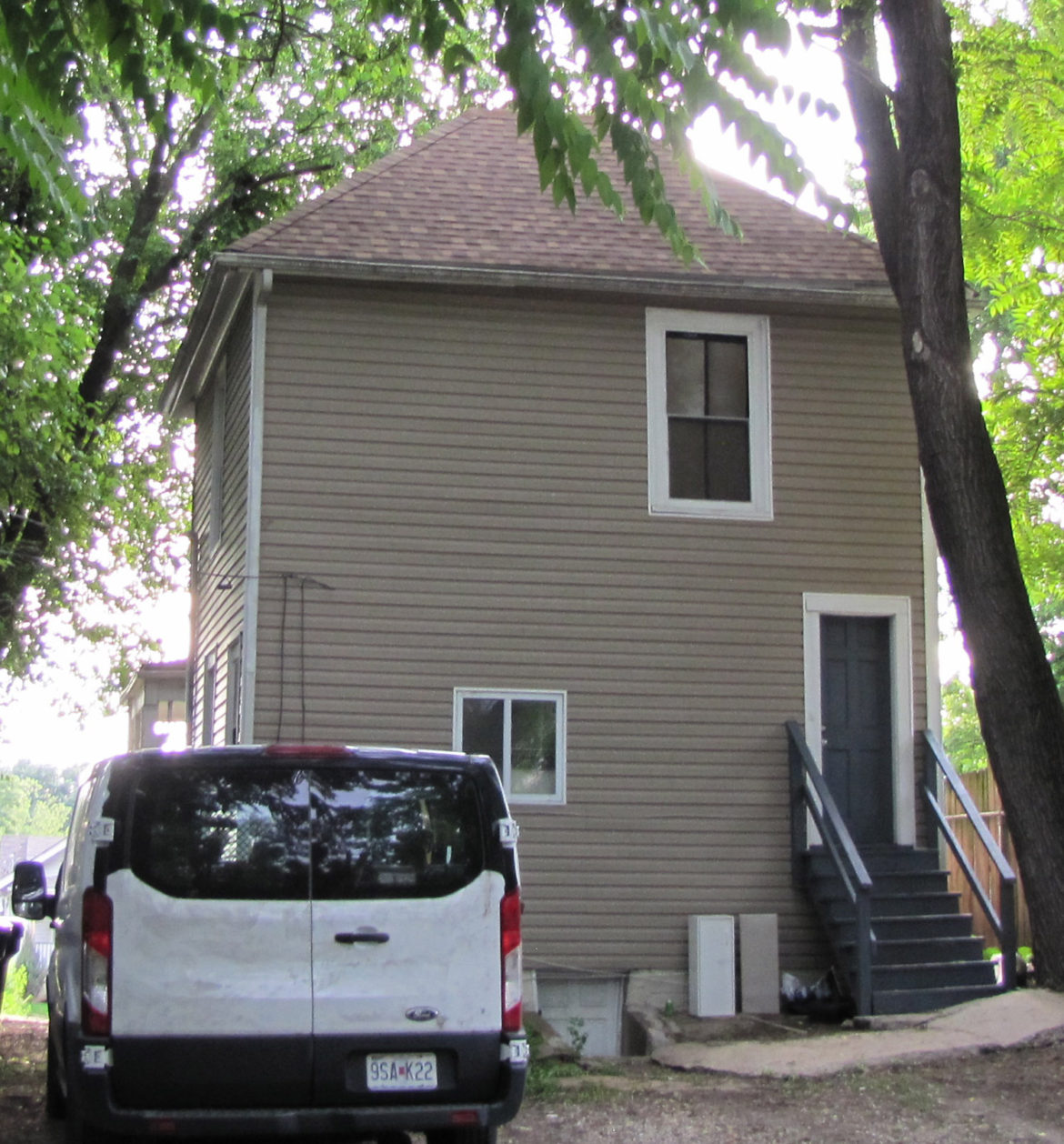 Looking at the eastern elevation we can see that the building has been remodeled. It doesn’t appear to have the front gable any longer but look at that upstairs window. 2 panes over 2 panes.

And streetlights.  The shortest ones I’ve ever seen.  In what amounts to out-in-the-country along a dirt lane.  It truly makes me wonder.  There is a church at approximately this location today but it is a different building.

And what about these two fellows with the mules? Just what are they up to?  And what is going on in the background? 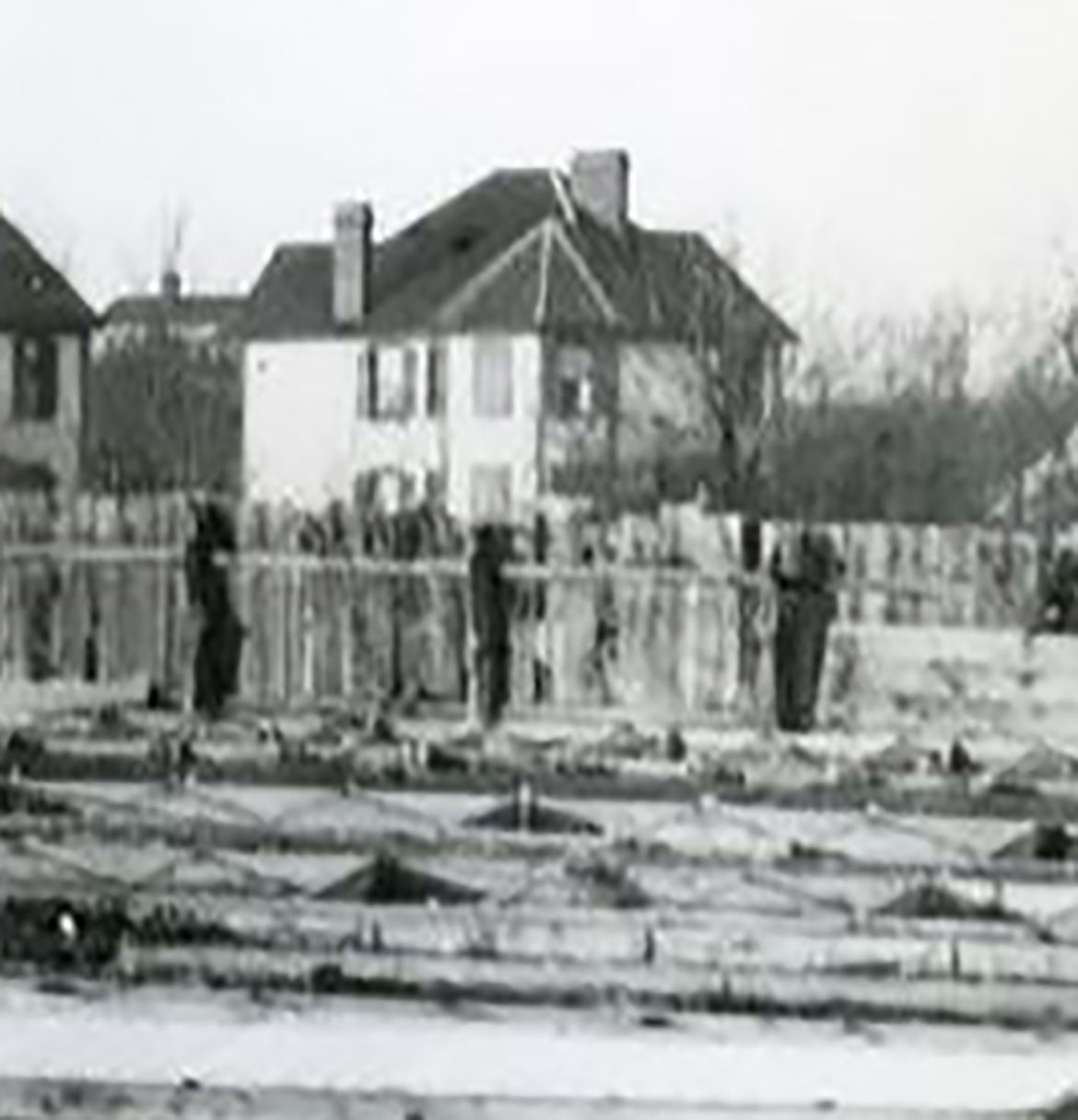 Judging from the chimney, the windows below and behind it and the roof over the bay windows, this home on the far left of the original photo may be… 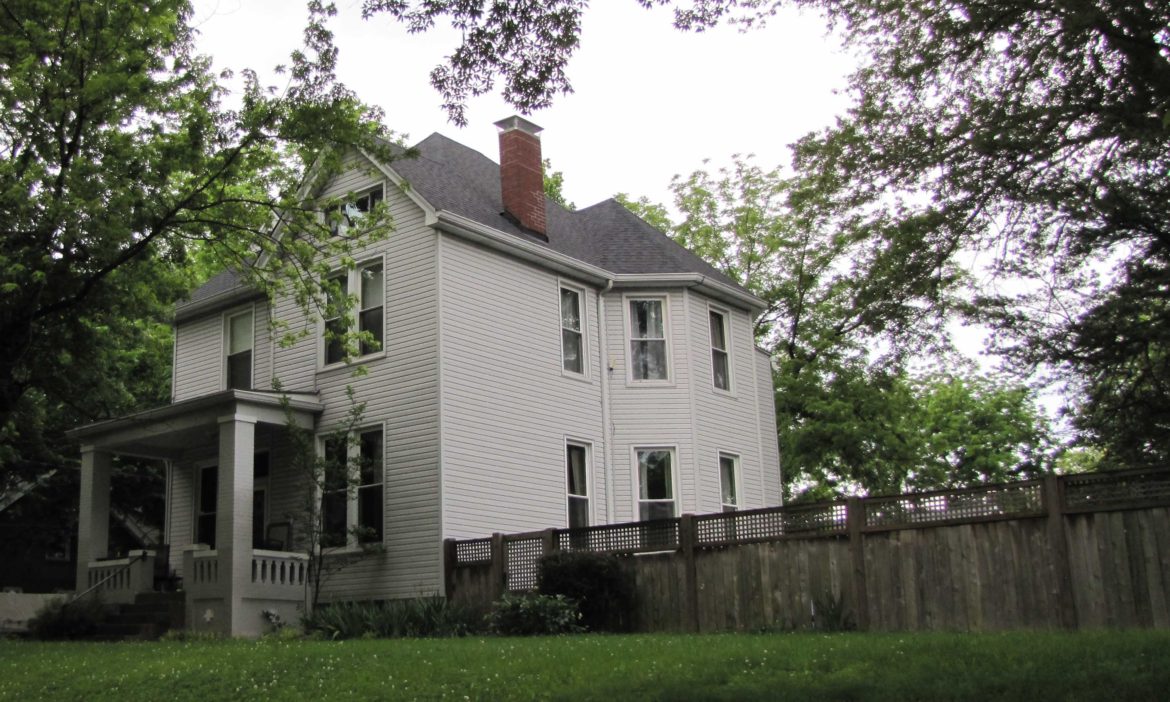 …this home on Blendon Place. It even still has the vacant lot next to it. 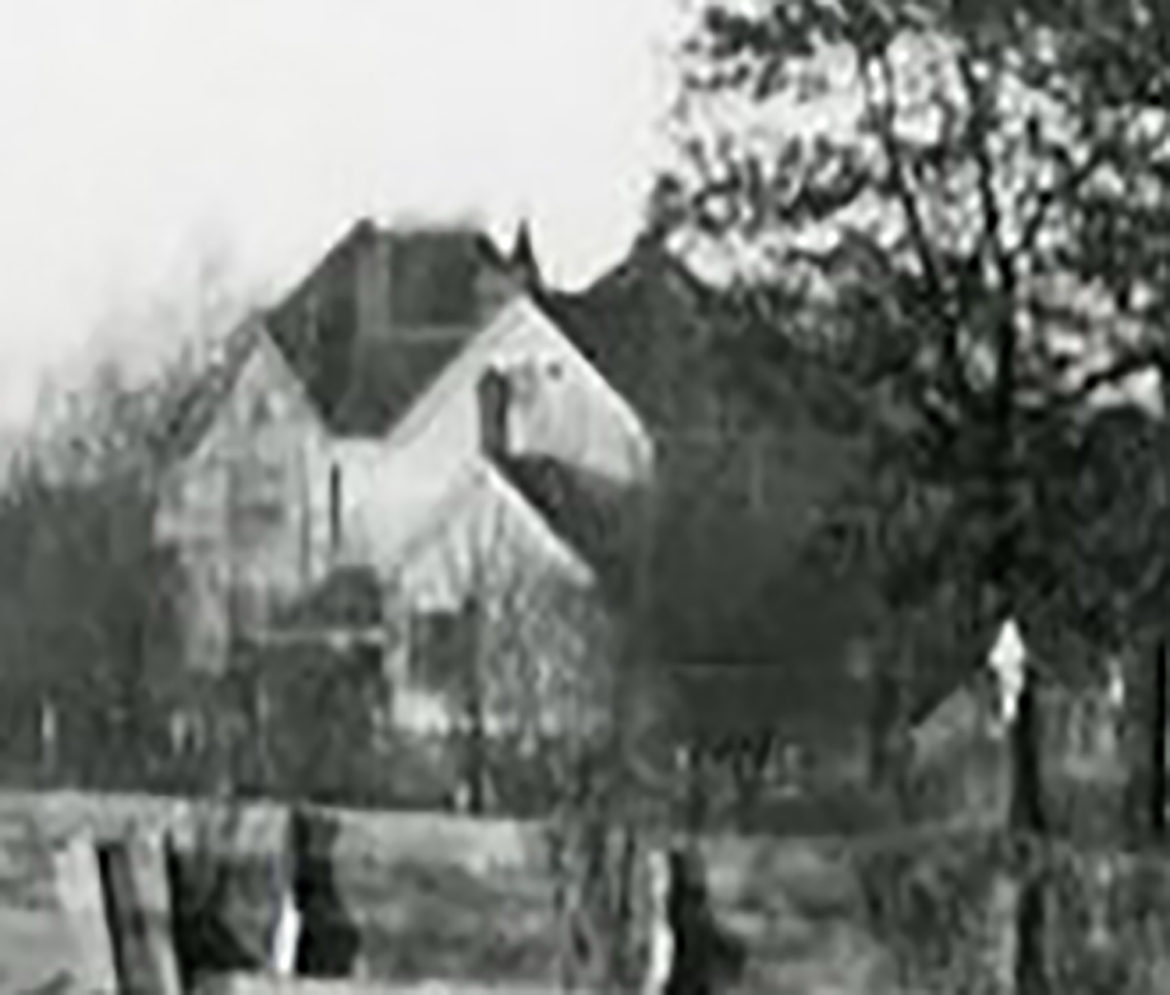 Almost directly above the mules can be seen what appears to be a very large home. Actually it is two very large homes. One is at 7040 Stanley and the other is at 2045 Blendon Place.  Closest to us is a one story addition on the rear (southern elevation) of 7040 Stanley.  Directly above the chimney of this addition and a little to the right the candle snuffer roof of the tower on the front of the home can be seen. 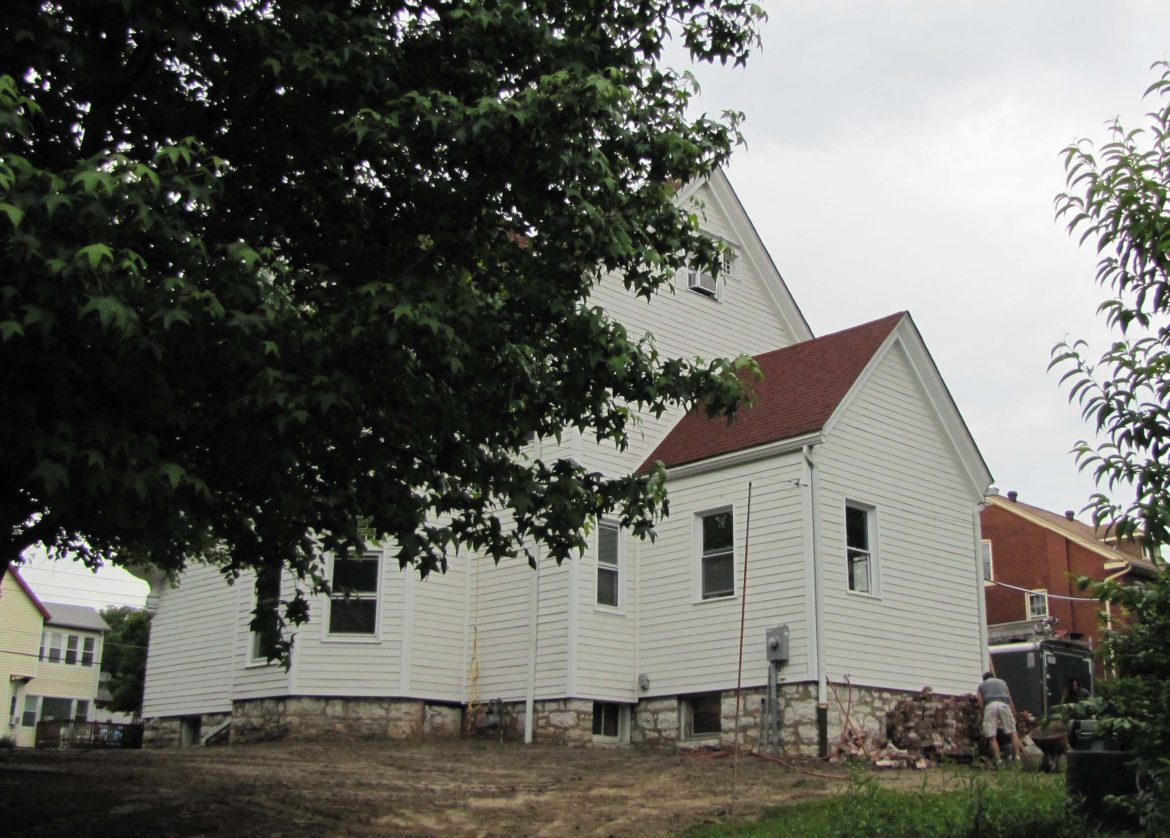 The rear addition today of the home at 7040 Stanley. 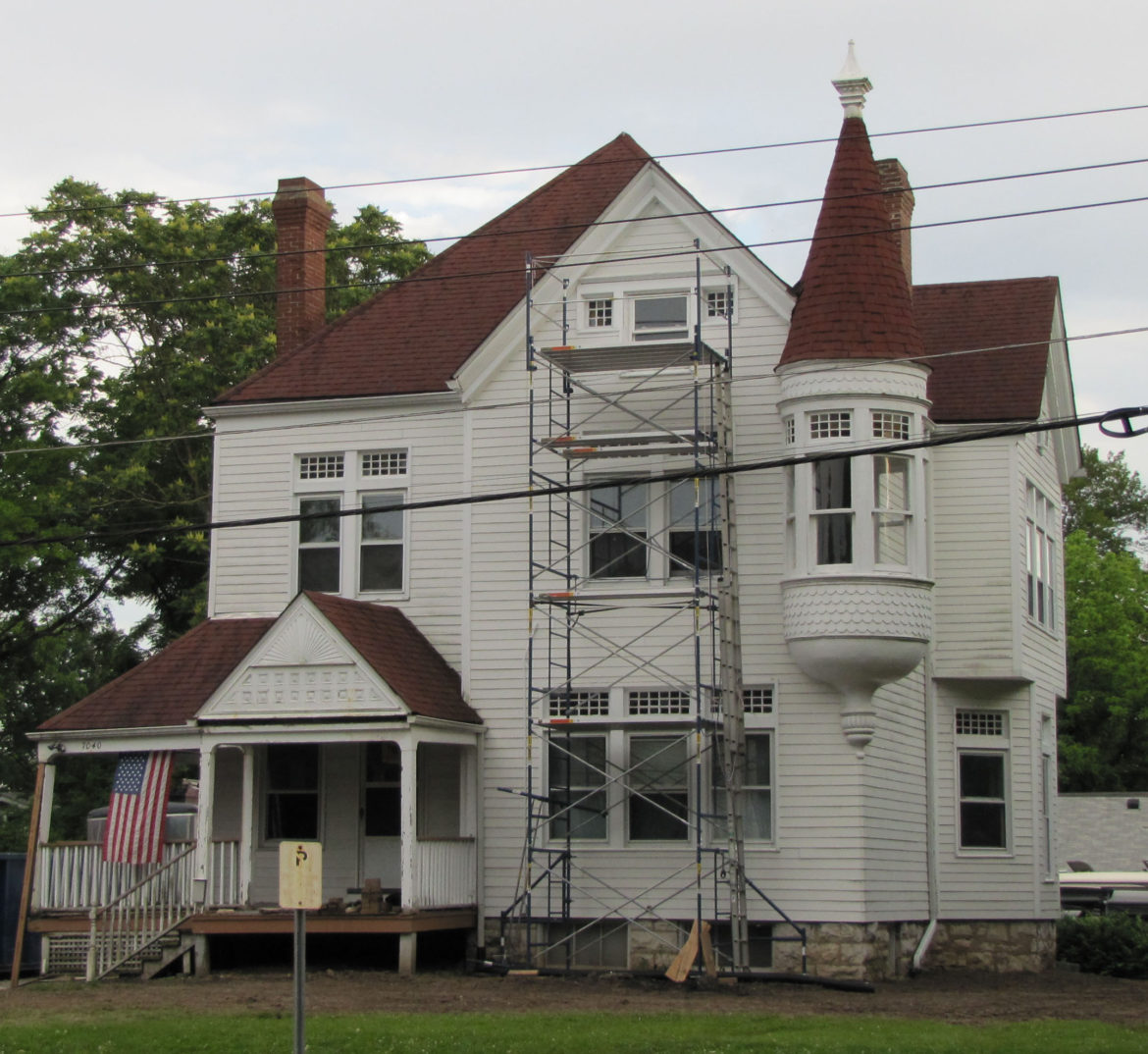 The front (northern elevation) of 7040 Stanley, built in 1895. Isn’t this a beautiful home? It is currently undergoing renovation from top to bottom.  In October of 1956, Pauline W. Pfeifer passed away. She had lived in this home for 50 years.  She was the widow of Herman J. Pfeifer, chief engineer of the Terminal Railroad Association, who had passed in 1941. 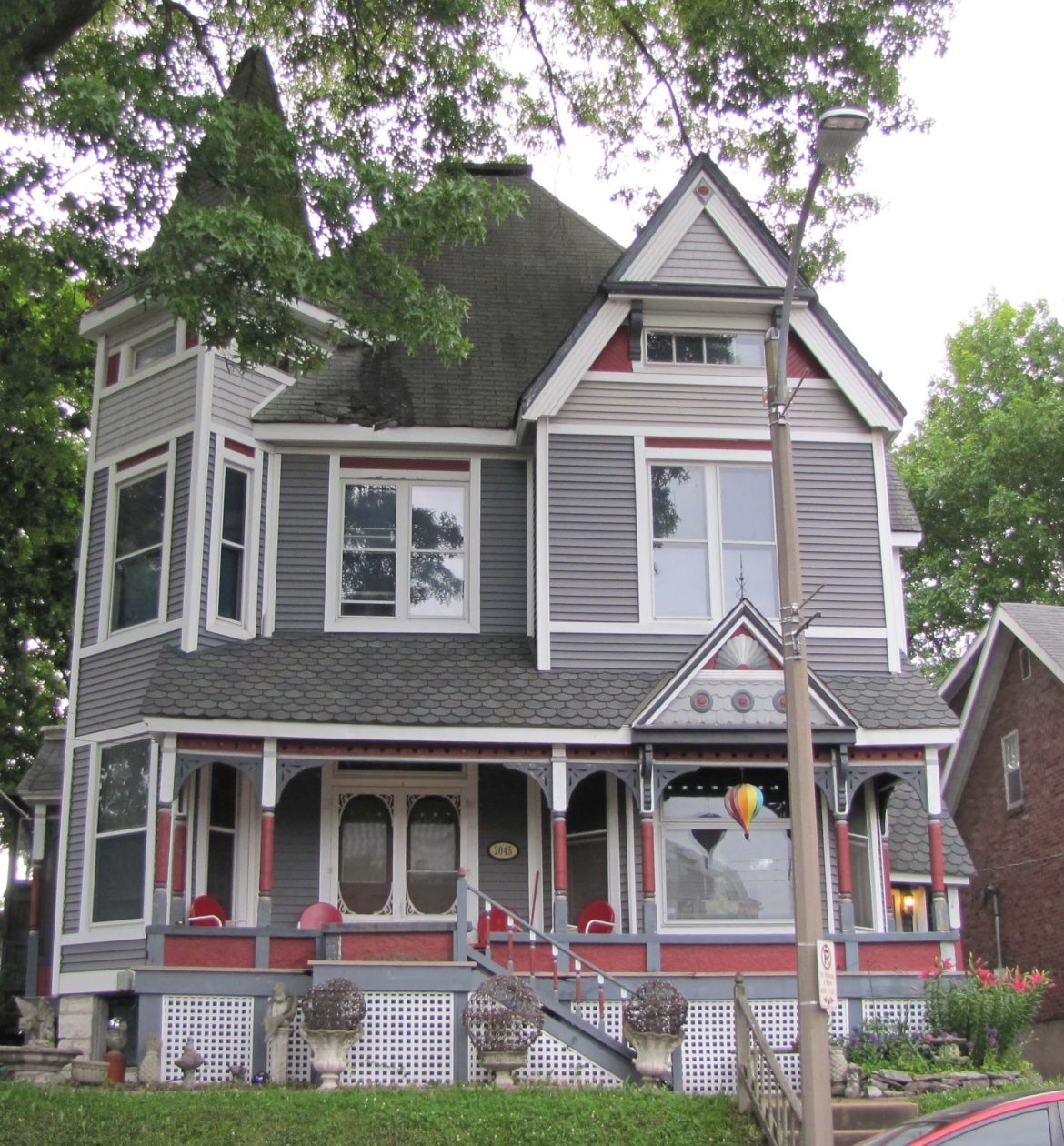 Perhaps the most interesting thing to me about the original photograph was the condition of the streets. I didn’t expect them to be paved but I expected them to be in much better shape than they were.  The Maplewood subdivision advertised Telford streets as early as 1890.  I am not certain what a Telford street is.  Some sort of paving, I imagine.

Early automobiles had wheels similar ( or identical in some cases) to wagon or carriage wheels.  This type of wheel was apparently necessary to travel on unpaved surfaces.  I have seen images of early vehicles in massive mud holes.  Try to imagine the condition of the McCausland Avenue in the image after a few days of heavy rain.  A mess.

I’ll have more on the Cora Clamorgan story in upcoming posts.

Until next post, obey all of the social distancing rules.  Wear your mask. Wash your hands. Wipe your feet.  No shaking hands.  No hugging.  No kissing.  Hopefully we’ll all get through this OK. 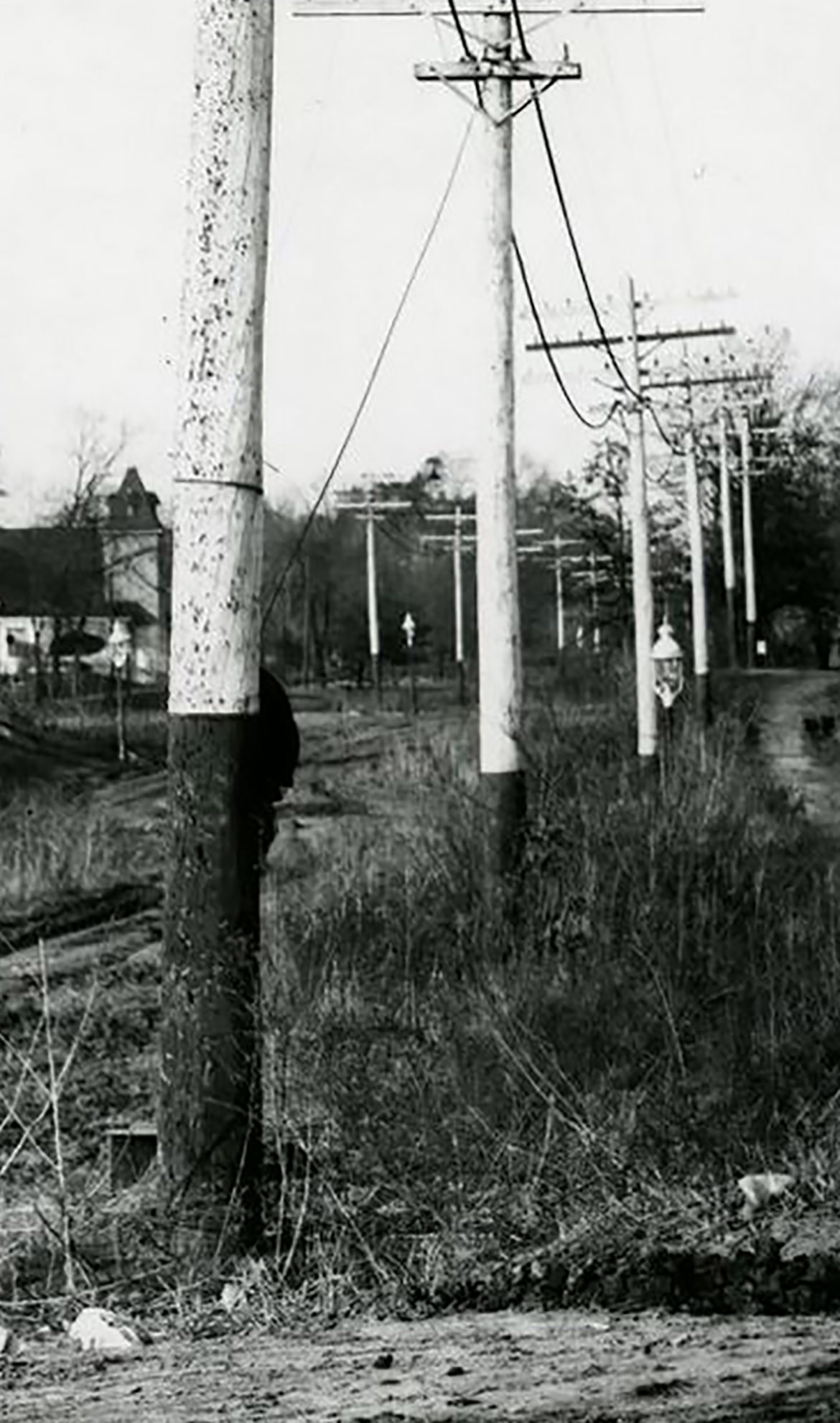 Reader Mike asks about the black blob on the first telephone pole. I can’t tell what it is but it appears to have a wire going to it.  Looking at this enlarged detail, I now notice that there is a depression in the roadway made obvious by the white paint on the poles.  The streetlights are not as short as they first appeared.  If the white paint begins about 4 feet above the ground then the bottom of the light might be at about seven feet or so?  What do you think?

Reader Mike also asks if those are bullet holes in the Manchester sign?  Mike, that is a really great catch especially considering you had no more than a fairly low resolution image to look at.  I think you are exactly right!  I got a big kick out of this.  I don’t know if we can take any comfort from the fact that they had those dumb ____ around then too.  Maybe we haven’t made much progress. 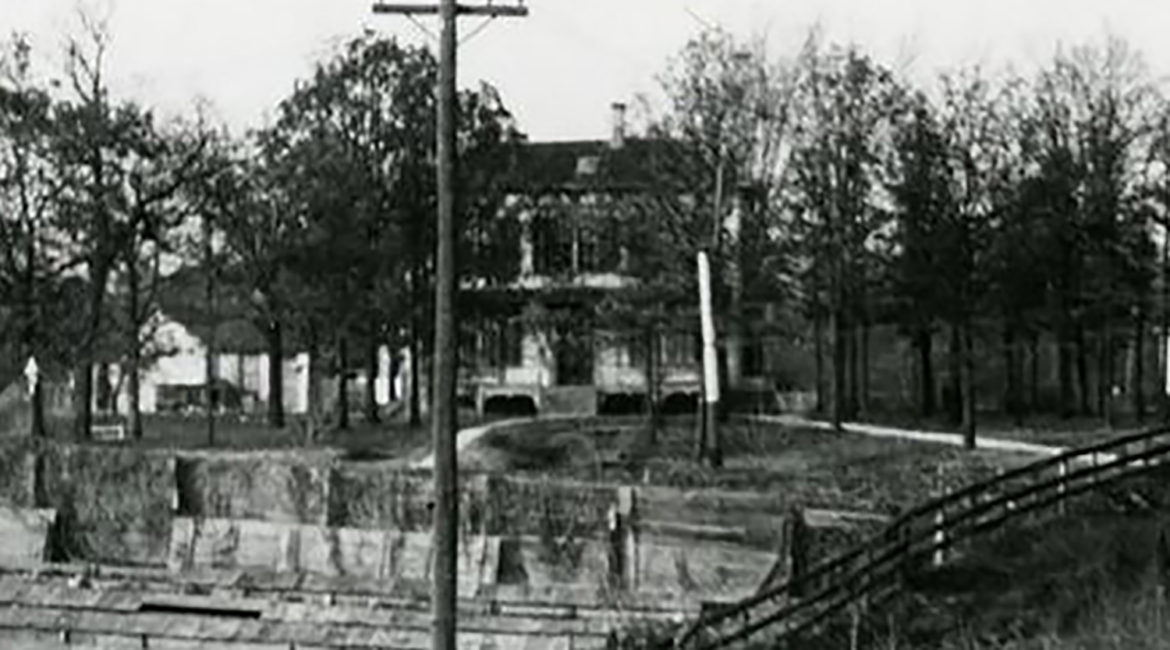 Here is an enlargement of a home that is now lost to development. It is just to the left of the church in the first image. 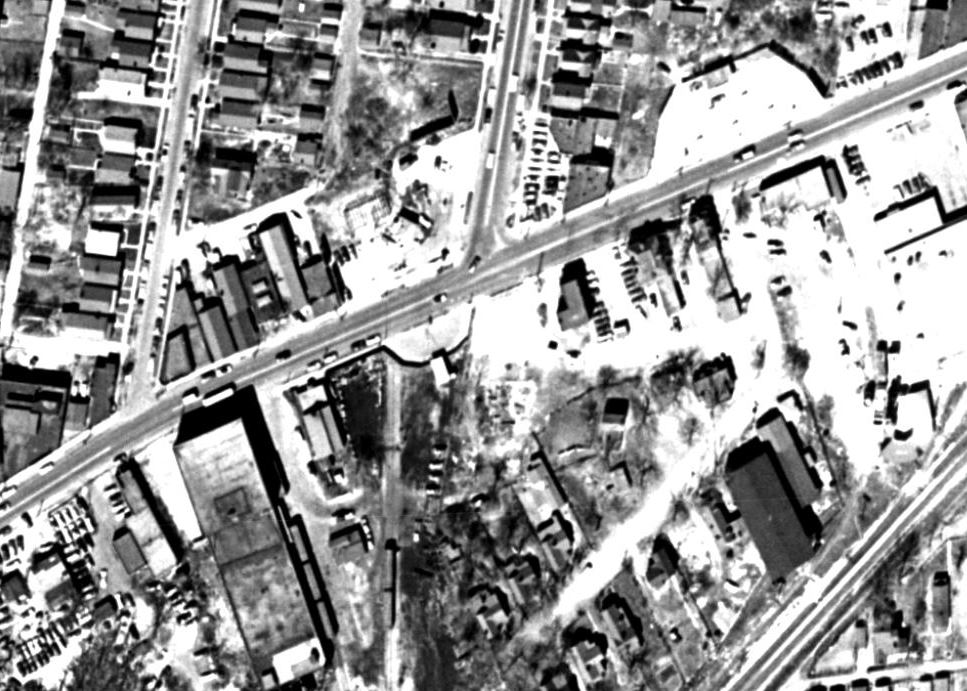 Reader Dave (whose comments can be read below) was kind enough to send this 1955 aerial photo. Manchester runs diagonally through the image. McCausland can be seen in the top center and not extending past Manchester. Thanks, Dave.

36 thoughts on “Maplewood History: An Early View of the Intersection of Manchester and McCausland”